On my first day in Cusco, Peru, I didn’t have anything planned so I looked at the tourist map to see where I could go. Among the list of museums was the very curious chocolate museum. Since it was near where I was staying, I decided to visit and learn more about chocolate.

The museum is located on the second floor and you need to enter from a passage on the side of the building. The museum isn’t really a museum but a shop/café with a few panels with information on chocolate.

Maybe i t was my ninja sightseeing skills, no one from the museum brought me around to look at things. I later noticed that other tourists were swarmed by fawning employees. In the end I decided to take a seat and have a coffee, or a hot chocolate, to waste a way a bit of my time.

The most intriguing item on the menu was the Mayan/ European hot chocolate. Based on information in the museum, we know that Mayans drink their chocolate with chili powder while the Europeans add honey.

You are presented with the ingredients for both versions of the hot chocolate: 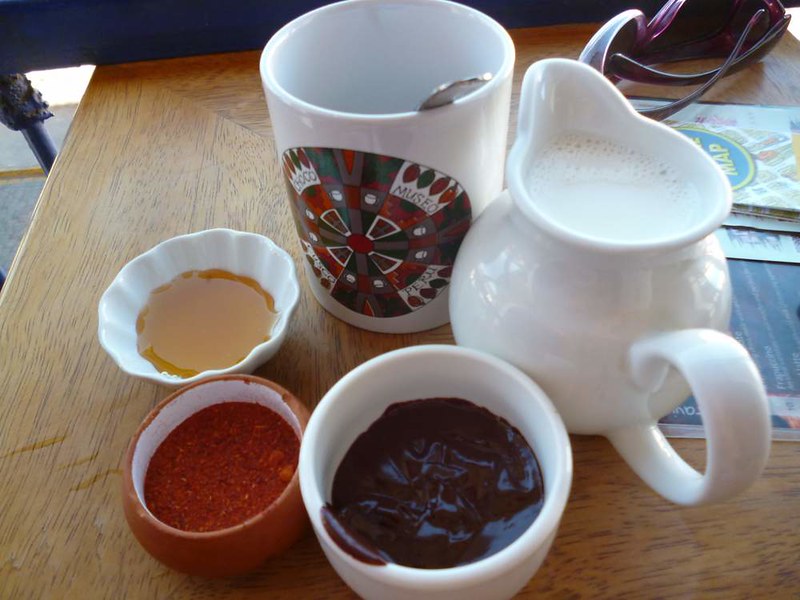 There’s no correct way to make Mayan hot chocolate so I dumped a lot of chili powder in. It didn’t taste as peppery hot as I expected so I was slightly disappointed. It did turn the regular hot chocolate into something festive with its red chili powder. 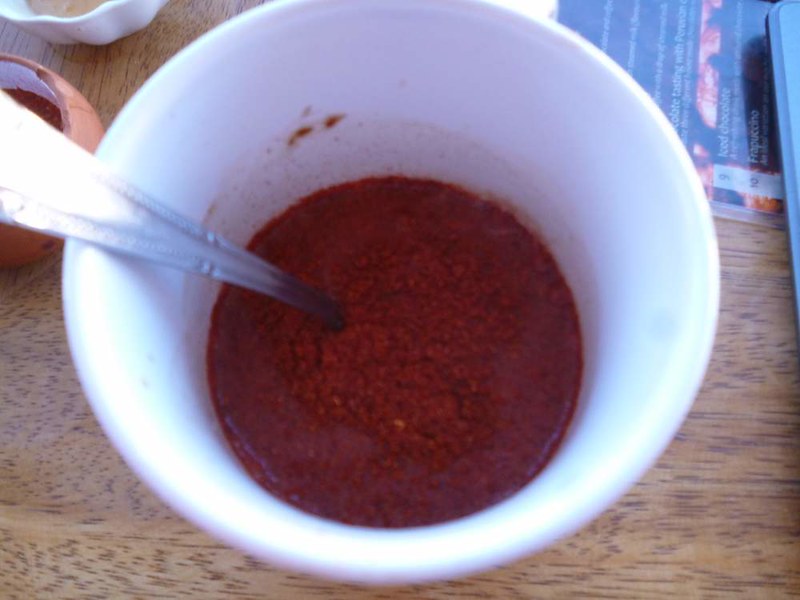 Where can you find Mayan hot chocolate 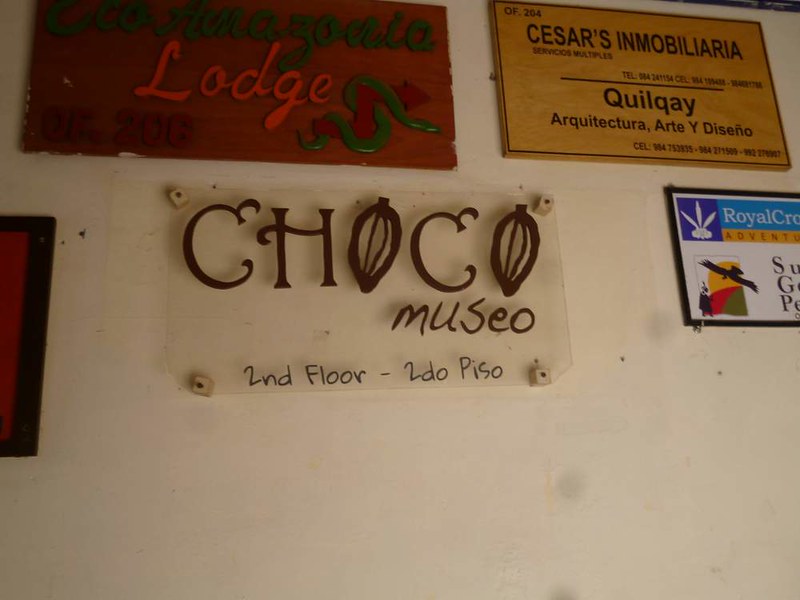 Other yummies in South America:

Today we’re slurping some soups made of fruits of the sea in Peru.

Some time ago, I talked about Latin America’s ceviche, a dish with raw fish cooked in lime or lemon juice. Today, we’re still eating food from under the sea but it’s cooked using fire.

I love soups and this extends to noodle dishes in soup. There is something very comforting about a food that doesn’t require you to chew too much.

I also like my soups tongue-burningly hot because that’s when I know that I am alive. I’m a bit of a masochist when it comes to soup.

Seafood soups in Peru were unlike the Chinese soups that I’m used to. Instead of clear soup, we have a stock that is bright orange. The ingredients always seem to threaten to escape from the bowls which are huge. 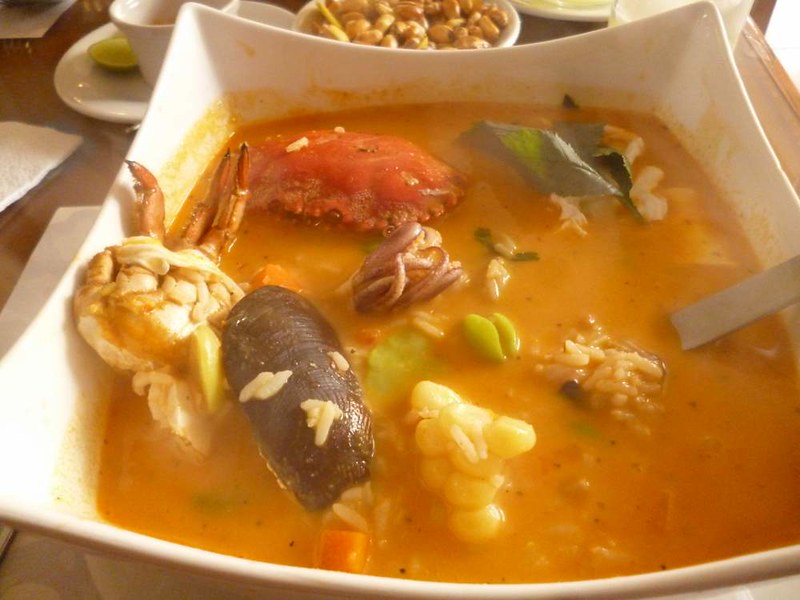 Where to find cheap food in Aguas Calientes [#FoodFriday] 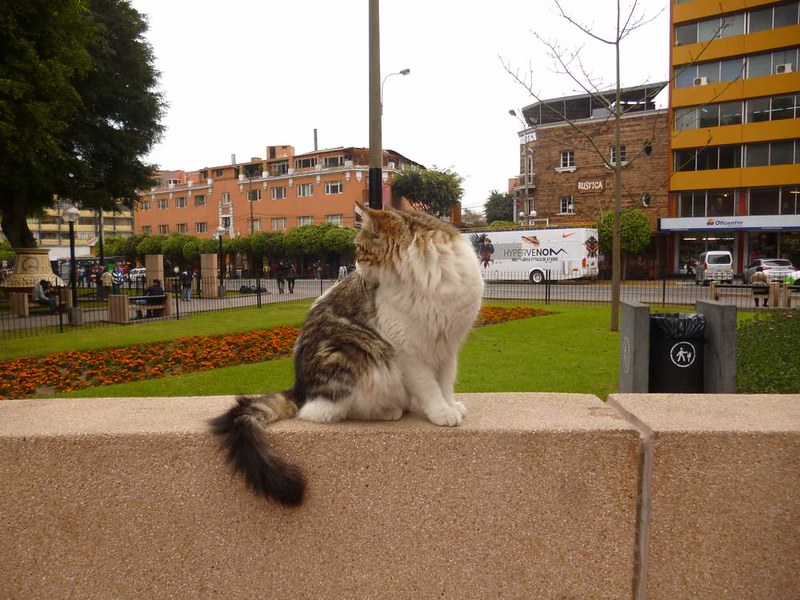 I knew that this assignment won’t be easy but I need the money for catnip. Why did I even touch that drug in the first place.

I’ve been following the target since this morning but strangely, I think somecat is following me too. I keep looking over my shoulders but I only see humans. I think I’m losing my touch.

The target has stopped to lean against this wall. He can’t hear me because I’m a silent assassin. Maybe if I pounce now, I can eliminate the target immediately. Here goes nothing. 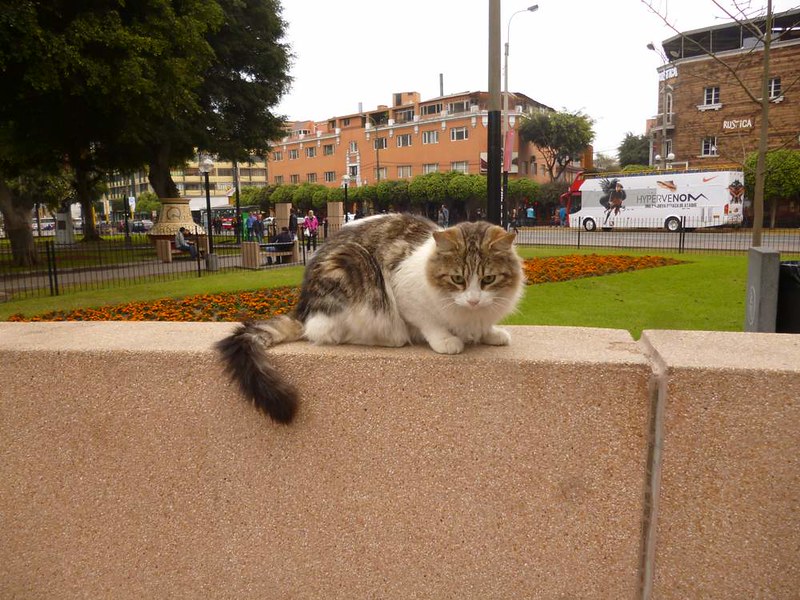 As I said yesterday, I don’t have any thing planned for Lima so I decided to get a haircut today. So much for doing my own hair, huh.

Below my hostel is a nail salon and a proper hair salon. The salon was closed when I was going out so I walked along the street looking for another hair salon. (I later found out that they also do hair jobs in the nail salon.)

I found a little place called Gladys. It was the name of my host mother in Arequipa so I thought that it was a good sign.

When I went in, there was only another customer doing her nails. The owner, employee and customer were all watching a volleyball match on TV between Peru and China. I interrupted them, asking if I could get a haircut.

The only chairs were taken by the customer so I didn’t think that I could get my hair done. However, the owner told me that there were haircuts so I stayed.

The owner dragged a chair from behind the counter and put it in front of the mirror above the sofa. That was my makeshift hair cut chair.

While she was getting her tools ready, she excitedly pointed at the TV and then to me. “China,” she said. I replied, “Soy de Malasia.” (I’m from Malaysia.)

I thumbed through a few hair catalogues and pointed to a short bob. The hairdresser looked at it and shook her head.

She got out another book and showed me other hairstyles. I chose one that looked very much like the last one. Fortunately, she agreed.

She started snipping away. And she even used a fun-looking razor. It was a razor covered on one side with a teeth-shaped plastic.

I was kind of worried that my hair was cut too short. The problem with my hair is that if it’s too short, it will start to stand vertically. When I was a baby, my hair defied gravity all the time.

Halfway through the hair cut, the result of the volleyball match was announced. China won and Peru was “among the top 4”.

I was really worried that the hairdresser might wreck my hair because China won. (Chinese-looking person == China == Gals who beat Peru.)

Fortunately, I was still alive by the end of the haircut. I don’t hate my new hair but I suspect they will be doing some gravity-defying stunts when I get back to humid Southeast Asia.

Rest of the day:

Took the bus one from one end to another. The areas away from the city center reminded me a lot of Indonesia.

Lunched at a Foursquare-recommended place. Had seafood soup.

Went grocery shopping before heading back to hostel.

Had a pedicure in the nail salon downstairs.

Last night, the hostel owner drove me to the bus station for my midnight bus from Nasca to Lima. Thankfully, I was not car sick during this trip although I was disturbed by loud snoring.

It was around 6:30am when the bus rolled into Lima. The sky was grey and it looked like it rained. The bus stopped at two stops, mine was the last at La Victoria.

I haggled with a cabbie (30 soles to 25 soles) for a ride to my hostel. It took a while to find the hostel because the addresses in the area weren’t in order.

After a call to the hostel, we found the place. The place that I’m staying at is actually someone’s apartment turned into a hostel. It’s really pretty inside but a bit far from the main bus station (6 blocks!)

I explored a bit of Lima’s historical center when I went to run an errand.

Picking up mail in Lima

I don’t plan to do much sightseeing in Lima for the two days that I am in the capital.

Since I’ve seen Machu Picchu, pretty much everything else is dull. However, there is an interesting museum that I might go to if I can figure out where it is exactly.

However, I do have a very important errand to run. My friend, D, in Singapore has sent me a package using a poste restante service. It means that the post office keeps your mail for you and you collect it by showing your passport.

Ever since I’ve read about poste restante, I’ve wanted to use the service to collect mail in a place where I do not have an address. For me, this is really romantic.

It took a while for me to find the central post office but it was really easy to pick up my package. The lady looked at my name and went in search in the “L” box which did not have anything for me and in the “Y” box which had an envelope for me.

The hostel owner, Marco* (his real name), passed me a transportation card for Lima. I went off to explore the public bus system on my own.

Here in Lima there are different types of buses. The one I took was the Metropolitano which reminded me very much of TransJakarta, the public bus in Jakarta.

There are levitated platforms in the middle of the road where the buses stop. Here in Lima, you’ll need to tap your transportation card, paying 2 soles for one entrance.

It’s easy to take the bus but it’s difficult to get on since there seems to be a lot of people already on the bus.