To be honest, I don’t really know why I want to visit Machu Picchu. The main reason is probably that it has been so hyped up. I don’t mind

Many web sites that I read recommend heading to the bus station slightly before 5am to catch the first few buses that leave at 5:30am so that you can catch the sunrise.

Initially, I planned to do the same and set my alarm for 4:45am. When the time came and my iPhone blasted out my alarm, I went over to my phone and changed the time to an hour later.

I didn’t fully fall back into sleep but when I checked my phone, it was 5:55am. I checked my alarm and realized that I had set it to 5:45pm.

I got up and got ready. I checked out of the hotel around 7am and looked for food because I planned to stay in Machu Picchu well past lunchtime and I need a good breakfast.

My favorite French pastry place was open. I ordered a cafe con leche and two pastries. This should sustain me for a long while. 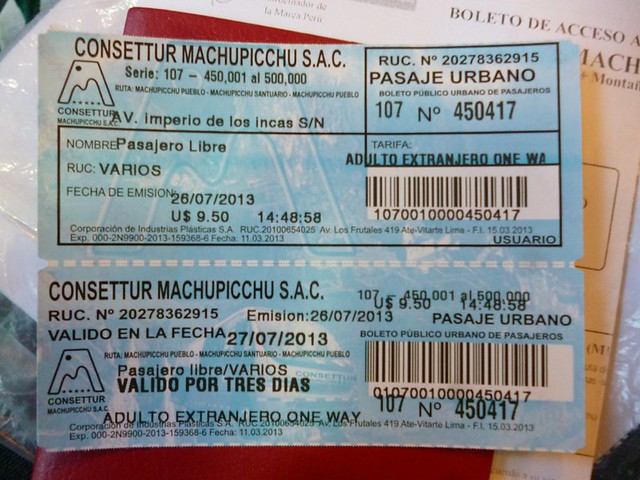 I bought a one-way bus ticket from Aguas Calientes to Machu Picchu. The queue was long when I got there but the line moved quite efficiently. The bus was on a very windy uphill road and took about 20 minutes to reach the entrance. 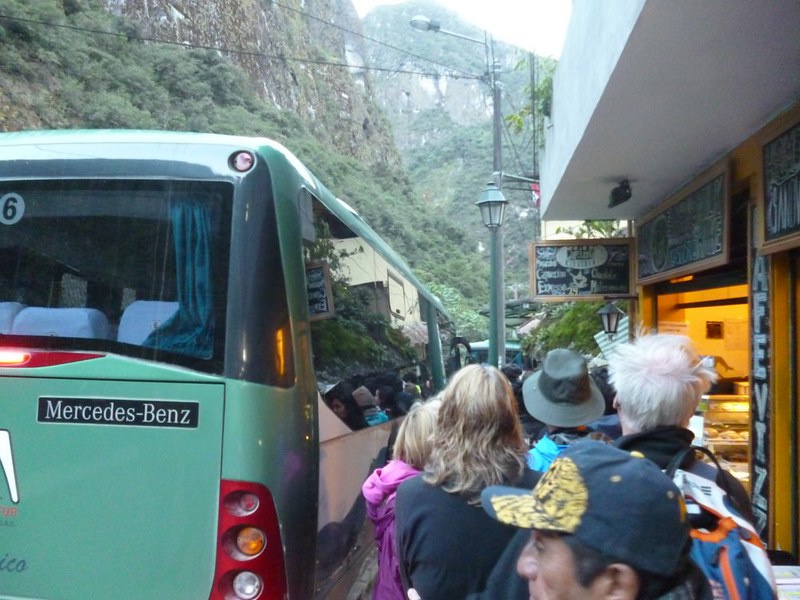 Almost at the end of the ride, I saw Machu Picchu Inca town and Huayana Picchu–the two most photographed parts of the thing we know as Machu Picchu. It looked like tiny Lego blocks from afar.

After the ticket check where the person scans your ticket and checks your ID name against your ticket name, you are free to enter.

I asked the guards after the entrance if it is true that there is a Machu Picchu stamp. They told me that the stamping starts at 9am. So take note and don’t leave too early.

There is a little walk from the entrance to the spot where most people take their Machu Picchu phototos.

When I first saw the real Machu Picchu, I thought, “Wow. It looks like the postcards. But a bit smaller than I imagined.” It wasn’t until I was inside the city walls that I felt tiny.

I took many photos showing the same angle of the site. All of them look the same but I feel obliged to take as many as I can. This resulted in a dead battery at the end of the day.

My ticket allows me to climb Machu Picchu mountain. I tried walking the first 30 steps of the mountain and gave up. I’d see the site from ground level. Thank you very much.

After some phototaking, I thought it was time to head into the city but when I was walking in the direction, I found a very nice nook in the wall with two large stones. I sat on the stone and found it really comfortable. It also gave me a good view of the mountain and the ancient city.

Then I took out my Kindle and started reading. It was a very good place to read because the sun had not reached that particular spot yet. From time to time, I look up from my book and stare out at the sight below–so that people don’t think that I’m crazy for reading in Machu Picchu.

Tourists passed by my reading spot. Only one Indian man commented joyfully about my “comfy nook” while the others just ignore me or look with curiosity.

I only moved when the sunlight crept into my lap. My knees were hot and soon my head would be too so I moved. The reading session took a little more than an hour but it was a fun session.

By that time, it was past 11am and I noticed that the tour groups have descended in drones. While there were a lot of people, it wasn’t crazy crowded like some of the sights in China. Maybe it’s because of the 2,500 daily limit.

Machu Picchu Inca city has a few llamas on its premise, grazing on the grass or running away from humans. (I even spotted llama poo in one of the buildings, so I imagined that they roam around freely when humans are not around.)

There was a baby llama that was still drinking milk from its mom. Some of the llamas gave up running away and allowed humans to pose with them.

One of the llamas even had a flew and was sneezing from time to time, giving everyone nearby a jump. Llamas are not quite as cute as alpacas but they are still fun animals to touch.

After walking a while, I found another good reading spot. I saw this from across the amphitheatre, the spot is against the wall and is very shady when the sun is still in the east.

While reading, I snuck bites of my takeaway pain au chocolate, wiped tears from my eyes using my jacket and eavesdropped on tour guides nearby.

It was another hour later when I finished the book. By that time, the sun was higher up in the sky and sunlight reached my shoes. It was time to leave to continue my tour.

Most impressive part of Machu Picchu

Some people say that they feel very spiritual when they head to Machu Picchu. I usually roll my eyes when I hear these comments. What does spirituality feel like?

It’s a bit funny how people find it spiritual when everything was man-made. They should feel more in awe of those who built the site and not some invisible energy.

I was most impressed with the Inca terraces. From the postcard photos of Machu Picchu, you don’t get to see how huge the terraces are but they are really really impressive.

I took a path leading up to the terrace and ended up at the entrance. I decided that 1:30pm was a good time to end my visit since I’ve been in the compound for about 5 hours.

The queue to the bus back to town was horribly long but I queued with everybody else.

Back in town, I had 6 hours to kill before my train so I ate, read and ate.

Do you plan to visit Machu Picchu?