Today we are going to the little town of Colonia del Sacramento for just a bite and a drink.

In the past two weeks, I revisited the main meals and snacks of Argentina. Today’s post won’t be long because I was in Uruguay for only a day. The trip to Colonia del Sacramento was a visa run for me and also a chance to add another stamp in my passport.
END_OF_DOCUMENT_TOKEN_TO_BE_REPLACED

I woke up at 6:45am today to prepare for my ferry to Colonia del Sacramento which required me to check in starting 8:00am. I was kind of excited to head to Uruguay because I could get a new stamp in my passport as well as have my Argentinian visa extended.

The hostel receptionist helped with calling a cab while I tried to gobble a medialunas. Medialunas is a Argentinian croissant. Unfortunately, the one served at my hostel is usually slimy and cold so I do not have a very good impression of it.

The taxi fare from the hostel to the port was cheaper than I thought. It was only 37 pesos after the phone booking charge.

The streets were empty at 7:30am and the only taxis I saw were all heading to the port.

The port for Colonia Express was in front of the casino. I’ve seen advertisements for the casino on a large screen in the middle of the city. It showed a rather ridiculous ad of a man winning loads of money and marrying Lady Luck who just happened to walk in while he was gambling. 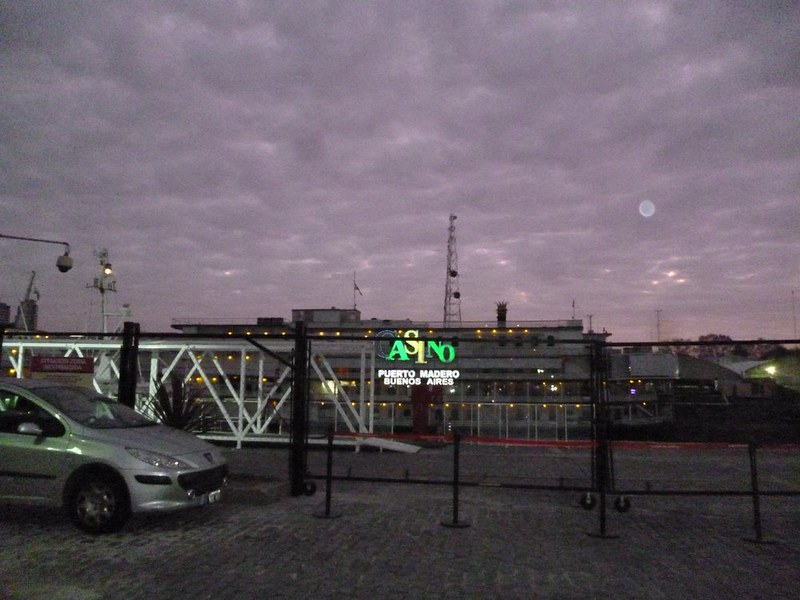 The immigration process at the port was really fast. First you go to a counter where the Argentinian officer stamp your exit stamp. Then the passport is passed to the person in the next cubicle who happens to be an immigration officer from Uruguay.

The Uruguay officer didn’t even asked where I was staying and I was the proud owner of an entry stamp for Uruguay.

Before we were able to head to the immigration counter, we had to scan our luggage. The customs officer had a rather sweet looking golden retriever with him. The dog looked mostly bored with his tongue lolling out.

The dog had to sniff at all sorts of different luggage. My water bottle was repeatedly waved in front of the dog, as if it might contain something dangerous.

Unlike the ferry I was on in Greece, the boat was rather small. All the seats were taken and I sat with a family of three.

During most of the journey, I was napping with my mouth open. Oops.

The sky was gray and the clouds looked swollen when our ferry arrived at Colonia. Worst thing was that the town was next to the sea so the wind was very cold.

Luckily, the town was so pretty that I didn’t mind being outside. 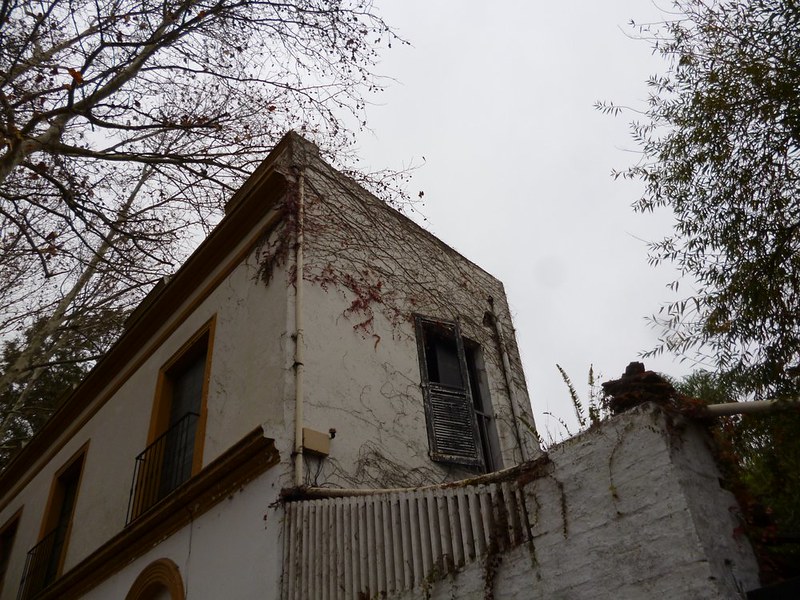 Abandoned building wasting away gracefully with a veil of vines. 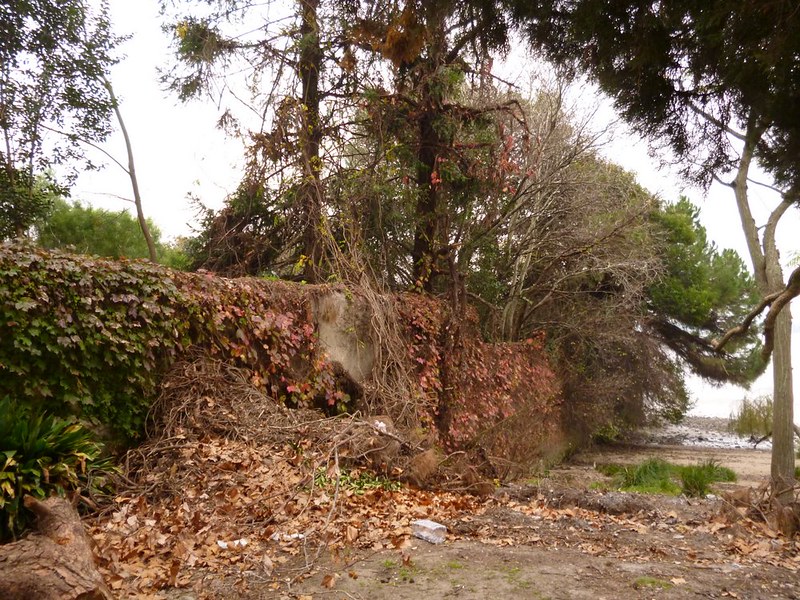 This wall of green and red leaves looked like it popped out of some story book. 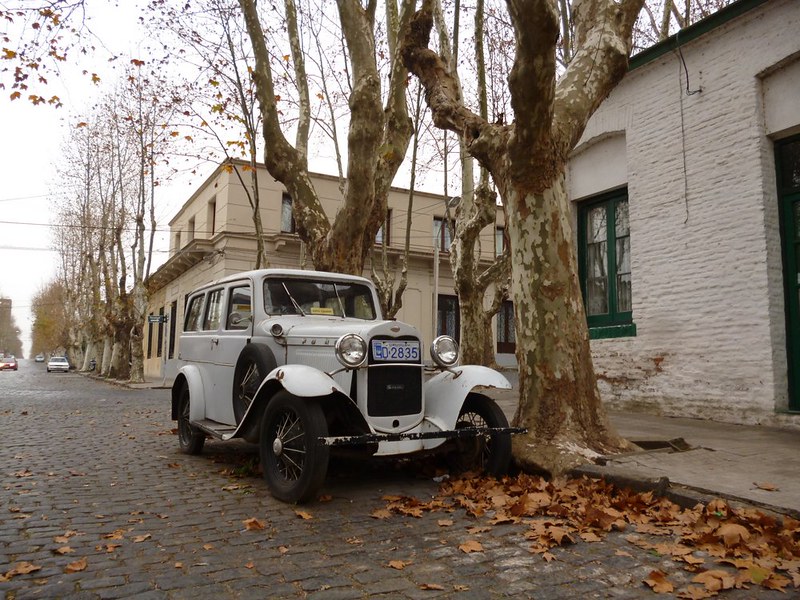 There seems to be a lot of unused vintage cars in Colonia. 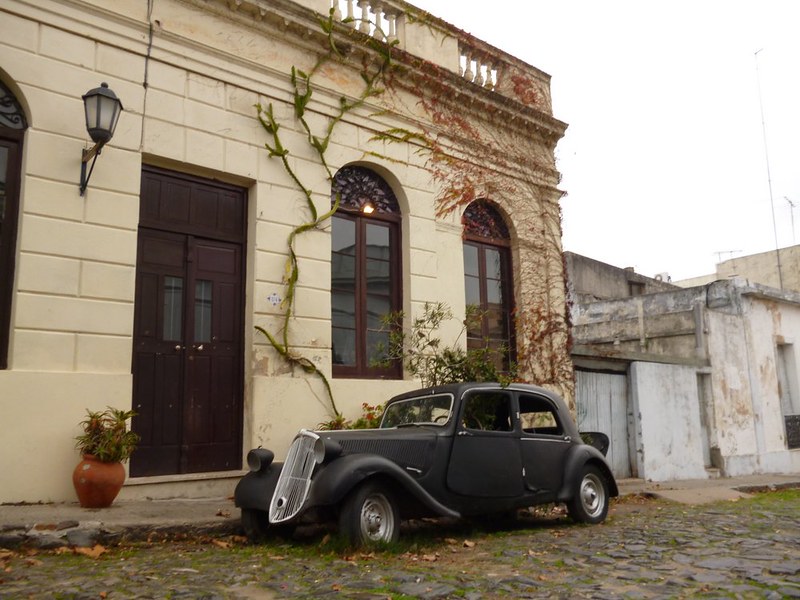 This car even has a plant growing inside. 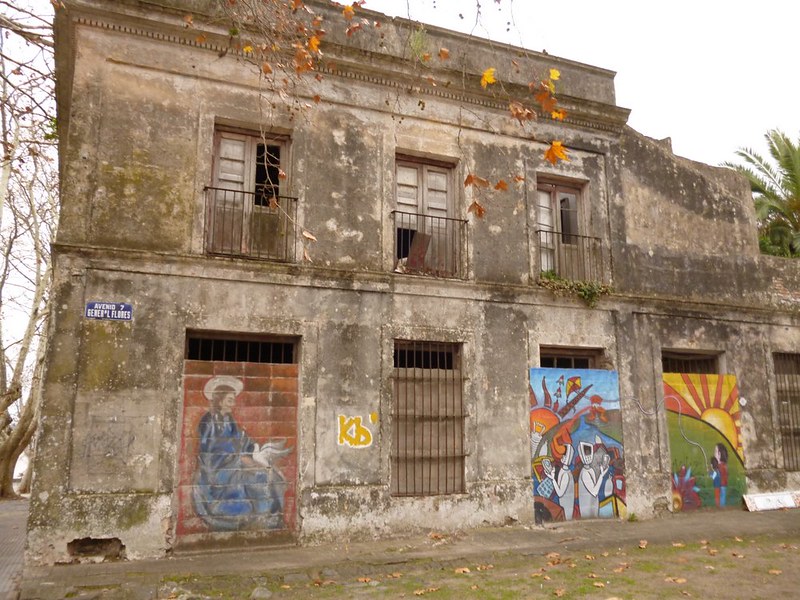 Most of the shops at Colonia were closed. I couldn’t figure out where the museums were so I walked into random streets.

Even though the place looked deserted, I felt rather safe and was (kind of) sure that no one would pop out of nowhere and mug me. 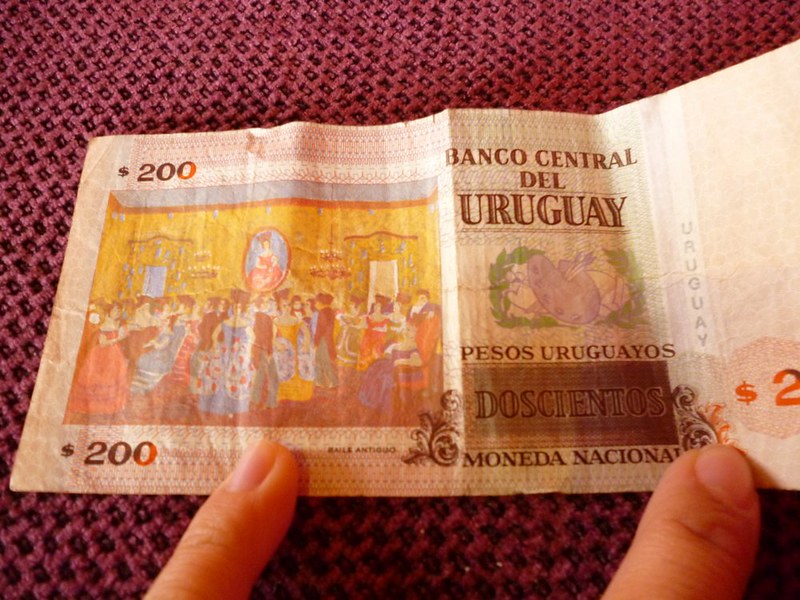 I love the painting on this Uruguay 200 pesos.

I was lured into a restaurant for an expensive cup of not so good coffee with milk. I sat there for more than an hour reading to take advantage of their heating.

I also tried to se if the ATMs in Colonia could give me US dollars. I seemed to have terrible luck as all of them said U$, and not US$.

I chanced upon the tourist information center, was given a map and walked around in the center to look at the rather small exhbition.

I couldn’t have a nice lunch since the bad coffee ate up about half of my Uruguay money. But I did have a rather good sandwich with a sausage in it. 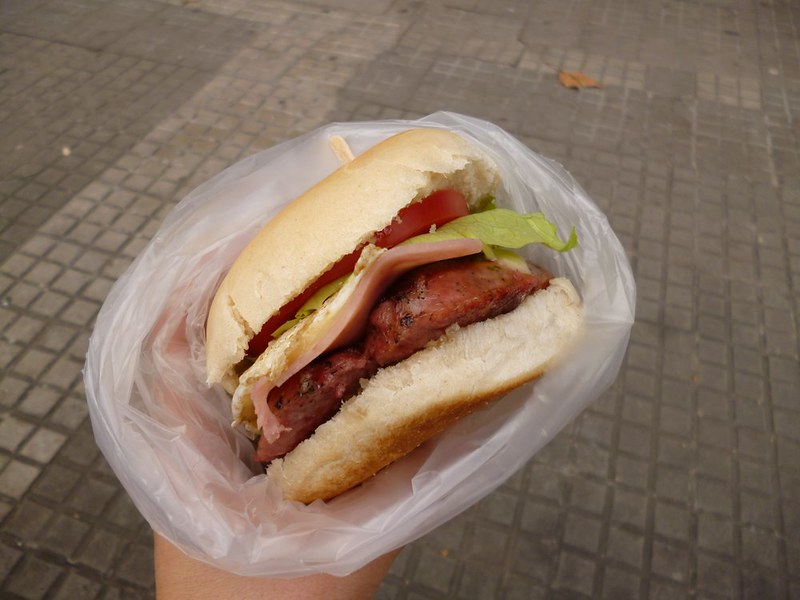 At about 2pm, the sky looked like it might rain any time so I head back to the port to do what I do best…reading.

The immigration process in Colonia was the same as in Buenos Aires with two immigration officer sitting side-by-side. I read a little more before the ferry was about to leave.

When we got back to Buenos Aires, it was really dark. The guy at the taxi stand recommended those who were heading to the city center to take the bus instead of wait for a taxi that might take about 20 minutes.

Since the port was in the “bad” part of La Boca, I trailed one of the ladies who asked about buses. She led me to the right street and I eventually found the right bus back. I still had to take a short subway ride back since I wasn’t sure of the bus would stop in front of my hostel.

Still, all is well and I was not mugged. Three cheers to that!

Where have you recently been to for a day trip? Share your comments below.