I picked up a pamphlet for Discovery Walks SF when I was at the airport. Since I had no plans for the day I checked in, I decided to join the Fisherman’s Wharf tour since my hostel was just nearby.

I don’t think I’ve ever joined a walking tour before. Hmmm… I did try to join one in Paris but I was too stingy to pay the tips so I didn’t.

I’m glad I did for this tour. I didn’t have breakfast so I grabbed a small bite (croissant and coffee at Ghirardelli, a combo offer) before heading to the meeting point.

I looked around to find someone wearing orange. I saw a girl in an orange T-shirt and a dark jacket taking pictures. She then walked away so I had to look some more.

Then I saw a guy with a lump of orange next to him. The lump of bright orange turned out to be a vest and he zipped it on.

Putting on my not-shy, cheerful face, I went to ask if he was from the tour and he was. Jesse, the bearded tour guide.

No one else went up to him so we started the tour with only one participant (me!). It was great because I didn’t have to share tour guides with other people.

The tour was great. The sun bright and warm while the wind chilly.

Jesse was a very engaging guide too, always accommodating even when I ask questions like: “What do they call Irish coffee in Ireland?” “What is the size of San Francisco when compared to London?”

The greatest tip I got from him was that Bay to Breakers was happening this Sunday. (I had the impression that it was a weekly event but turns out it’s only an annual thing.)

He said the event is one of the two in SFO where “everybody” would have the same amount of fun. Other events, take Gay Pride parade for example, makes people happy but the most happy would be the GLBT folks. The other everybody happy event is Hardly Strictly Bluegrass.

While I’ve read a lot of guidebooks about San Francisco. Jesse shared other tips that I haven’t come across. These include 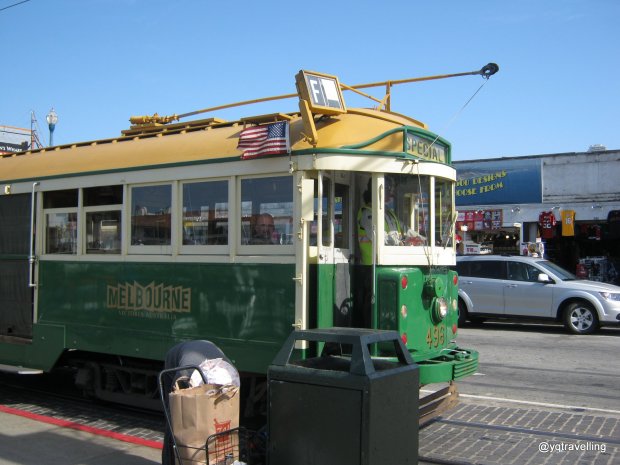 Interestingly, I’m liking the US more than I thought I would. Blame it on the TV and the dark side of the Internet for making me think that the country’s weird.