I wasn’t promised a beautiful orange sunrise, but I didn’t expect to see a salted egg yolk at the Borobudur sunrise tour. 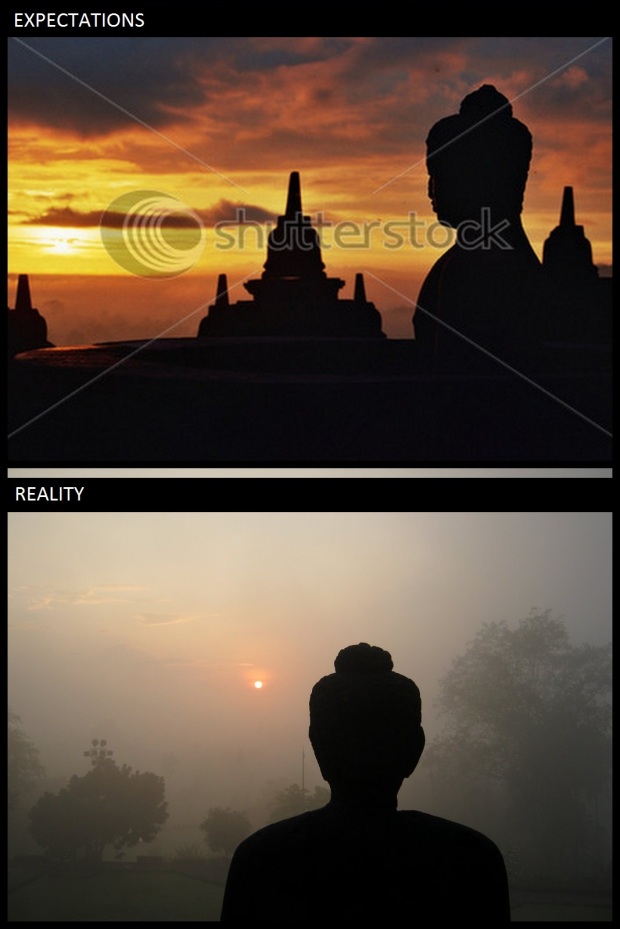 Having read about the Sunrise at Borobudur tour, I booked a room at the Manohara Hotel for a night–our only reserved lodging and our most expensive.

The reason for the Manohara stay is that hotel guests are charged cheaper for the Sunrise Tour entrance:

And, we wouldn’t have to trek all the way from Jogja (a 1.5 hour bus rise) to reach there at 5a.m. That alone is worth the hotel money.

We requested for a morning call at 4am. I set my alarm for even earlier. I slept well on the comfy bed and dreamed of reading a truly scary ghost story (according to my diary). Strangely in the dream, I was haunted by the while in real life, it gives me invigorating cold chills.

They’re kidding when they say it is a tour because it’s actually a self-service thing. After collecting our gear consisting of an entrance ticket which promises coffee and a snack at the hotel restaurant, a torch light and a mini sarong cloth which awkwardly covers body parts that are already double covered by underwear and pants/skirt, we head off into the night/pre-day.

Only the torch and coffee were useful

The sky was still dark and we had to shine our torch on the ground. I had went there the day before so I sort of know the route. I regretted wearing two long sleeves because the weather wasn’t cold at all.

We trekked for about 5 minutes to the gates of Borobudur. As usual, we talked to the people there in Bahasa Malaysia just so we wouldn’t be thought of as something as exotic as a Japanese person.

One pak there said the sun usually rises at about 5.30am so we would have time to walk around the temple. When he says walk around, he really means “a round” with emphasis on round.

Around the mulberry bush

Model not to scale

When I was up in the temple, I couldn’t feel how big it is. It’s like being one grain of sand at the beach–I could only see the other sand and not know how big the beach is.

It wasn’t until I was far away from the temple that I realize that wah, it’s damn big. Maybe it’s a metaphor for my myopic life.

So according to the video introducing Borobudur, we are supposed to walk around the temple clockwise. I didn’t the day before and I made sure I corrected myself this time to earn karma points. Kaching!

So off we went, shining our torch on the carvings, hoping to see a tableau that was explained last night on TV.

When it was around 5a.m., we head up to the top of the temple, at least to the most top we could get to. In the past, when colonials roam, the round bell shaped part used to house where there used to be a tea house.

We could not get a good place to sit as most other tourists have already marked their photo-taking territory. In the end, we went a level down and sat by the edge. It was a much nicer place as we could frame the stupas into our photos.

While sitting, something strange happened. The trees far in front us slowly disappeared behind a curtain of fog, or is it mist? The fog was so thick that I could see it as something semi-solid and not the water vapor it is.

We sat on the cold stone and waited. Time ticked. It was 5.10am. Still no sign of the gorgeous orange sunlight the brochures and ads made me to believe. Instead, there was gradual light coming from behind the wall of clouds far in front. 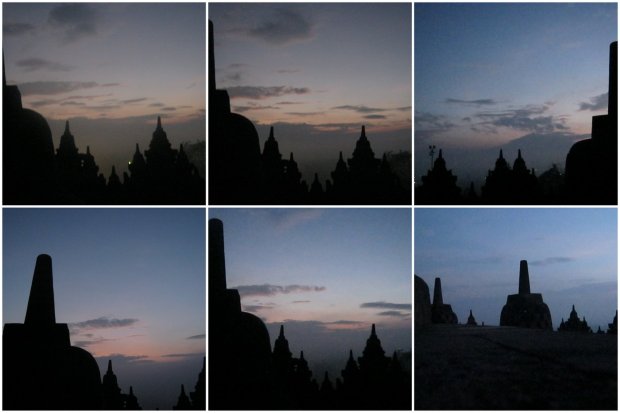 Stages of sunrise at Borobudur

The sky turned from dark to muddy orange then to blue.

At 5.30a.m., we decided that sitting around won’t bring the sun so we split to look at the building itself.

Later, I learned that the sunrise was blocked by the ashes of Gunung Merapi. Well, I’ll just say that not everyone who comes to Borobudur would see a sunrise blocked by a volcano, so we’re pretty lucky too.

The then-mysterious mist enveloped the temple. It was foggy when I too a picture from the foot of Borobudur. At least there was still light.

I continued my pilgrimage of clock-wise temple-circling, taking pictures of headed or headless buddhas along the way. 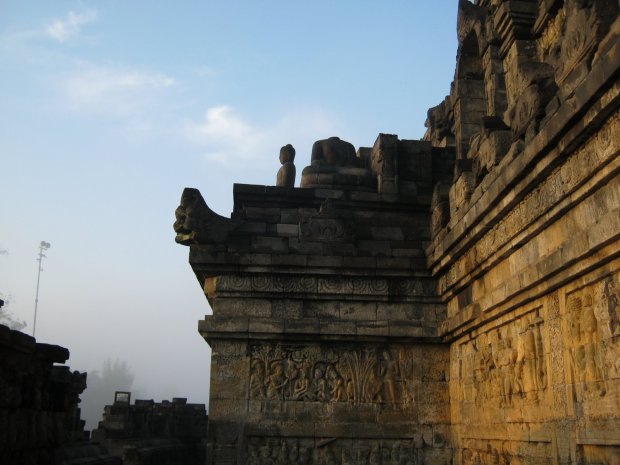 From the video last night, it seems that a lot of the stories on the walls were about self-scarification. I found the mural of Buddha’s previous rabbit incarnation. In the story, the rabbit/Buddha and his animal friends met with a holy man. Rabbit/Buddha’s friends all have gifts for the beggar/holyman/god but it/he didn’t. In the end, Rabbit told the beggar/holyman: “Please eat me instead.”

On the second level, while walking through the passageway, you will realize that on the left are the animal/people story while the right is the story of Buddha’s life.

I speed walked pass some of the murals and ended up on the east side.

Then I saw it. The SUN! Or at least a small ball of light far away. I scrambled up the staircase but decided not to go too high up in case I miss the sun. So I took a photo where Buddha was looking into the sun.

After catching the “sunrise”, it was back to exploring the walls. Unfortunately, my blood sugar dipped further down. The voice in my head kept saying: Hungry. Hungry Hungry Hungry.

A touch of modernity

But I made myself walk more rounds. The weather was also cool enough to feel like I was in an airconditioned room so that helped a lot with the feeling of hunger.

I finally did leave, while D continued exploring.

While I had my coffee and fried banana with cheese at the restaurant. I realized that while I liked the murals and all that. The temple looks better from afar. 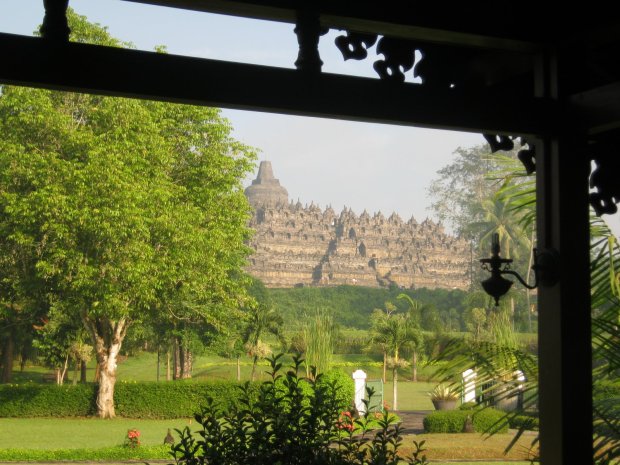 Also, the temple is best visited before the sun comes out of the fog. Around noon, past check out time, we were sipping avocado juice at the restaurant and we saw tiny tourists holding gigantic umbrellas climbing the temple. That must be hard work.

Curious about Indonesia? More posts on my central Java trip

2 thoughts on “Sunrise at Borobudur: Expectations/Reality”