[Hi, before you continue, I have to warn you that this is is a rather TMI (too much information) post. It has the most concentration of the word “naked” out of all my posts. In case you are curious, I’ve used the world “naked” before.

You are welcomed to imagine whichever person you want to see naked while reading the post, if that makes you feel better. You have been warned.]

This is an elaboration of my second last day in Turkey.

One of the things you need to do in Turkey is to get a Turkish bath at a Turkish bath (hammam). For those aren’t sure what a Turkish bath is, it’s a bath where someone–hopefully Turkish for an authentic experience–scrubs you really hard with a loofah and let you lie for a short period of time on warm tiles.

Yes, you pay someone to scrub you in the nude.

The last time I let anyone bathe me was when I was a kid and didn’t have full control over my limbs.

I’m not usually a shy person when it comes to bathing matters. After spending a bit of time in Japan, I am comfortable with walking around naked in Japanese and Taiwanese onsens. But getting someone to rub my body with a loofah is probably a test of my limits.

Even though I have Turkish bath on my to-do list, my mom who was travelling with me in Turkey wasn’t keen at all. She’s the type who get squeamish in onsens so I understand that. In the end, I have to visit the baths on my own.

According to my research (reading loads of mixed reviews on Tripadvisor), there were a few baths around my hotel area. I eyed two and started looking for them.

I found Cagaloglu Bath’s side door after a long walk up and down Istanbul’s slopes.  Fortunately, it was also the ladies’ side door. Entering the entrance, I passed by a poster of Kate Moss posing on some tiles before the screen that divided the bath and the outer world.

A long poster hanging on the second floor told me that it was one of the “1000 Places To See Before You Die”. That probably means that I’ll be paying for a lot of ambience too.

The little court had a few marble tables and stools. There were a lot of ladies sitting around looking bored. They wore the uniform white polo t-shirt and some brown pants.

I asked the lady at the counter for the price. Looking at the chart, I did a quick calculation and realized that it was quite out of my budget. But I already had my feet in the compound and I feel compelled to sign up for a session even though it would mean less lunch for me. I chose the cheapest package that included a scrubbing session.

Counter Lady said I could pay later and shouted to one of the ladies. The woman who answered reminded me of Rebel Wilson.

I was shown to a room and told to change. The room had a sleazy look to it. A bed with a plastic-like dark green fabric was pushed against the wall. A small dresser with a feedback form was next to the bed.

The room had a glass window which was frosted on the bottom half to protect the modesty of whoever was inside. Not that we need any modesty since we would be buck naked in the sauna room anyway.

So I changed out of my clothes and wrapped a towel around myself. Since I was paying a night’s worth of a hostel stay, I wore my glasses so that I could admire the marble hammam. But as I closed the door, Rebel pointed to my glasses and mimed taking them off. So much for getting my eye worth of the hammam.

I was told to wear clogs and I shuffled like some Ch’ing dynasty lady with lotus feet. Rebel helped by grabbing my arm and steadying me.

I walked with blurred vision, passing an empty chamber before going into the hammam itself. Rebel brought me to the round stage-like marble place and slapped the surface. I interpreted that as asking me to lie down.

So I lied down on the warm marble and tried to relax. It was a bit difficult because the marble is hard. Being half blind without glasses didn’t help with my experience. Everything on the ceiling looked like a blurry bouquet of lights as the sun streamed through some of the circles on the roof.

After a while, I flipped myself over like a piece of steak to warm the front of my body (while covering my backside with my towel). My neck twisted uncomfortably as I rested my cheek on the marble. I didn’t know I have cheekbones until the marble pressed against them.

I tried counting how long I was told to grill myself. It didn’t seem very long before Rebel appeared. She was armed with a loofah mitten and a bucket.

She flipped me around so I was facing the ceiling again. With a bit of warm water sloshed on me, she began her car polishing moves. Every inch of my skin was scrubbed.

Halfway during the scrub, Rebel grabbed my hand so I could feel the bunch of dirt that she had scrapped off me. There seemed to be a crazy amount of dead skin on me. I thought back the times that I had showered and wondered why there weren’t as much dead skin.

Then I was flipped over like a burger patty. My back, backside and legs were scrubbed. When all was done, Rebel patted my shoulder and escorted me to the shower area.

The shower area is basically a corner of the hammam. The bath lady waits for the pail to fill with warm water before giving you a good shampoo.

When I was lying down on the tiles, it was OK for me to close my eyes and not look at what Rebel the Bath Lady was doing to my body. But now that we were standing up, I awkwardly looked at the top of her head.

As Rebel finished my shampoo, I saw her give my body a look and give a nod. I felt it was an approving nod, or wasn’t it. I wasn’t sure what to do so I awkwardly smiled at Rebel instead. Then I was wrapped in a towel and shooed back into the room.

Back in the brothel-like room (where no one gave me a “happy ending”), I counted my coins for Rebel’s tip. My notes were too large and luckily my coins were just enough for tip. 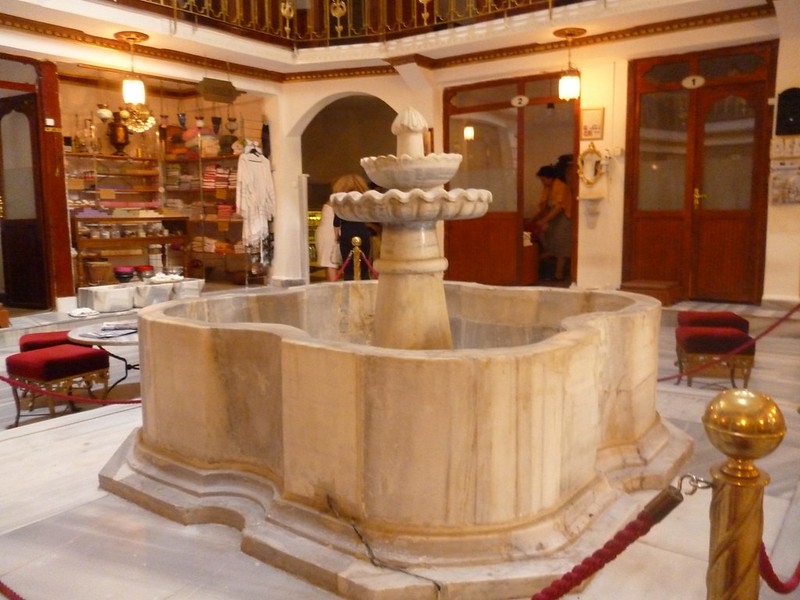 I shuffled out of the “1000 Places To See Before You Die”, feeling sparkling clean but strangely molested.

I later discovered that the ladies’ entrance I went into was a dwarf compared to the real entrance which was very beautiful. I felt cheated that I wasn’t asked to leave from the main entrance.

Read more about other people paying to get scrubbed by strangers: