While I love taking Spanish lessons, I cannot help but feel that time learning Spanish in schools is sucking time I can use for sightseeing.

My posts on school days lack excitement because the most exciting thing in the day is getting answers right when I blindly guess my answers.

Today, I learned past tense and imperative verbs in class. The conjugation of past tense drove me crazy and I felt that my brain would blow up.

I planned to watch Man of Steel today after class. However, the class ended quite late (to make up for yesterday’s lunch) and I couldn’t find the right minibus to board.

I reached the cinema too late for the Superman movie. The ticket guy said I was more than 30 minutes late so I cannot enter the cinema. In the end, I chose to watch Monster University instead.

I was about 10 minutes late for Monster University but thankfully Pixar likes putting cute short films in the beginning so I didn’t miss the actual movie.

As I watched the movie, I was delighted to find that they actually change the language of the opening credits and even the words inside the movie into Spanish. I’ve never seen that in other languages.

I didn’t understand 98 percent of the conversation but the movie was just fine without fully understanding the language. (I miss Boo a lot though.)

The rest of the evening was uneventful. I had a dinner of chicken and fries and headed back to the house for homework and Internet.

By the way, I have two videos of alapacas today. I can’t embed them here so check out at the brown alpaca on Instagram and the white alpaca on Vine. 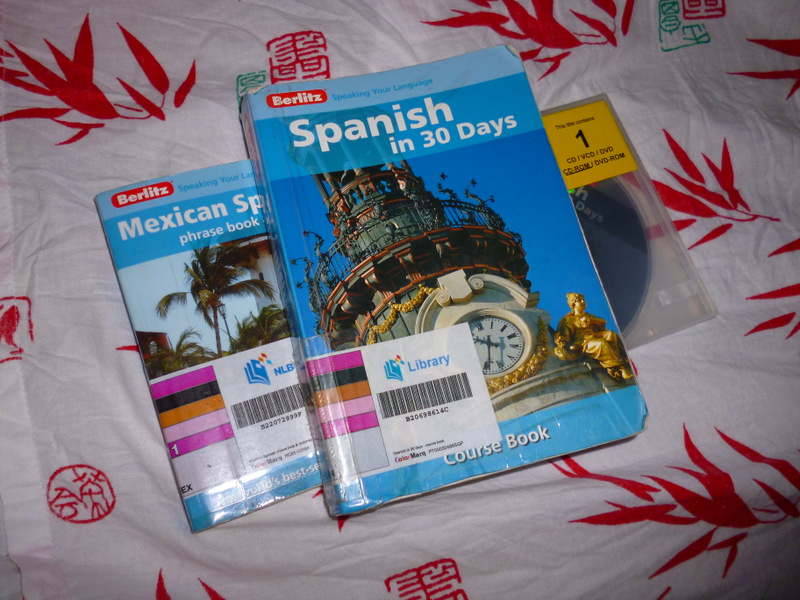 I’m travelling to South America some time next year and I want to be able to speak Spanish to help me go through life easier.

I went to a Spanish language school a few months back and quite enjoyed it. My four semesters of French made it easier to pick up the language compared to my other classmates who were were thrown into the deep end of the Spanish pool.

Even though the language school has higher level classes, I don’t think I am want to spend about S$300 to improve my Spanish.

What will I do then? I plan to self study.

While I probably won’t be as hardcore as he is buy speaking from day 1, I plan to learn from his methods and do a lot of self studying.

I’ve borrowed some language books and CDs from the library which I can practise reading and listening from.

For more listening and vocabulary practice, I can check out Spanish versions of pop songs (although I’m not that sure of some of their accents).

I also discovered that my current-favorite TV show/band (Flight of the Conchords) has Spanish dubs. I’ve put up a playlist of Los conchords in Spanish. If I can get my hands on the lyrics, I’ll be able to learn new vocabulary.

Even though it’s still too early, I have a Spanish version of Bridget Jones’s Diary which I bought second hand while in San Francisco. I have the English version, maybe I can do a side-by-side readings? My goal is to understand at least 50% of the content by the time I leave for South America.

To end this post, I bring you the only Spanish song I know all the lyrics to.

Week 43 of the Indie Travel Challenge is a challenge to start learning a new language:
Q: Do you speak two languages or more? What are those?
A: Fluent English, Mandarin Chinese and Malay. Conversational Japanese, French.

Do you have any recommendations for beginners in Spanish?

I will be going to Fukuoka and the people there use the Hakata dialect.

I want to learn Hakata-ben. Imagine how funny it will be when I use it elsewhere in Japan. It’s like when I was in China on student exchange and a girl there spoke English with (what I think is) a Texan accent. It was amazing, hearing a Chinese girl speak like a cowboy. How’dy! The Hakata-ben was featured in CHANGE as whatshisname (played by Kimura) was from Fukuoka. But it was illogical that he spoke standard Japanese when his mom speaks in Hakata-ben with him. The script writers should have bothered to change his lines. The other time I’ve heard Hakata-ben was in a movie. The mom talked a lot in Hakata-ben while her daughter replied in mmm… Very good lines, script writer, or were you on strike too?