My favorite meat is chicken so I want to introduce a chicken dish for today’s Food Friday: Samsui Ginger Chicken.

The chicken is served cold (versus steaming hot). You can wrap the chicken inside a sheet of cabbage, dip it into ginger sauce before eating it. (I would prefer inhaling the whole large plate of chicken.)

The chicken is slightly oily but very soft. The chicken skin melts in your mouth too. 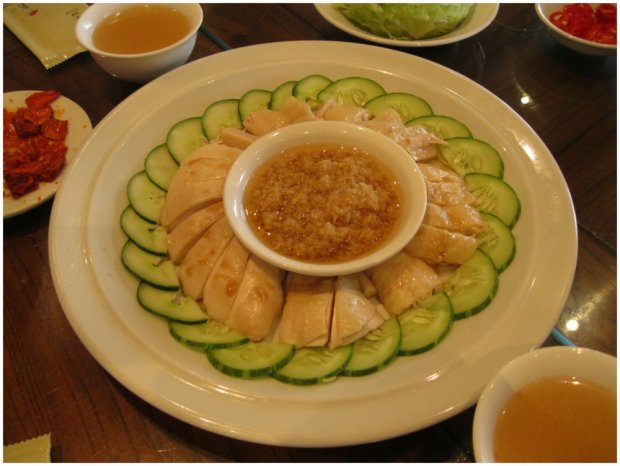 A traditional Samsui dish consumed by the Samsui women in Chinatown. Due to their low income, the Samsui Ginger Chicken was only consumed once a year, during the Chinese New Year. Chicken was steamed without much seasoning after which, dipped in ginger sauce before consumption. The ginger sauce is a fragrant and tasty compliment to the chicken. Ginger and sesame oil, as believed by the Chinese, removes excess wind from the body. You may wrap the chicken in lettuce to achieve that crunch when you bite into the popular Samsui Ginger Chicken.

I suspect this dish was an invention, and not really a Samsui dish. Or it could that the restaurant hyped up the dish.

The price of Samsui Ginger Chicken at Soup Restaurant is a little expensive for what is simply steamed chicken.

Do note that the Samsui women were real people in history and they played important role in the literal “building of Singapore”. The wiki for Samsui Women has a very good explanation of who they were.