and whoever his co-stars are.

August 15 will be known as Toma Day for me. [If i even remember this next year. will set a calendar day in my google calendar. ;) ]This is the day everyone’s jokes came true. Yes, everyone who joked that I’ll see Toma in Tokyo, thanks for your prophecies. Yes people, I’ve met Ikuta Toma in person!!! What luck.

I’ll write all the things in detail because I like repeating stuff. I might repeat this to you again and again, please forgive me because I have a very short term memory.

I was in charge of the August 15 Firday tour of Tokyo, I’ve became the sort-of tour guide of Tokyo because of my fascination with Japan. I thought that touring broadcast stations sounds like fun, my motive is to take as many pictures of HUGE drama posters as I can.

My guidebook only told me about Fuji TV and TV Asahi. FUji TV’s building is a modern one with a round observatory tower. That itself is an attraction. TV Asahi is in the classy district of Roppongi, so the guide book writer just wrote it in. Another book told about NHK, because it’s near Shinjuku.

I checked to see what shows the three broadcasting companies where showing. All of the shows are those taht I have not watched so it sounds really dull. Then I checked Tokyo Broadcast Station (TBS) because I remembered they were the one with Hana Kimi. Bingo! They have Maou too. Great, Maou posters, here I come!

Hui Ying left that morning and we walked to the station together. Hope her RA life will be very exciting.

FOr the tour of TBS, I asked A-Day to meet us at Akasaka-??? station. It’s not the nearest to TBS. We could go to another exit but that would require us to change trains, plus it was only a stop away from where we were living, we can go out really late and still arrive early.

But A-day figured out my evil plan anyway. Oh well.

We walked from the station to TBS, I didn’t really know if we were walking in the right direction. We reached the end of the long street and saw the sign for TBS. We pass the TBS shop on the way to the building.

As we went nearer, I saw Toma on a HUGE screen. I shouted to the others, “I see Ikuta Toma! I see Ikuta Toma.” They weren’t very impressed that it was on a big screen. I was disappointed that they were airing pre-recorded stuff. Then when we got nearer the building.

There was a lot of people when we got there. WOnder what event’s on. So we went to check the event board. 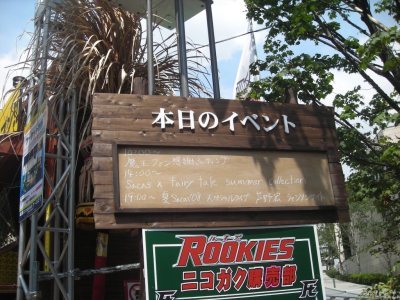 I saw “Maou fan thanking meeting” written in chalk. So it’s a secret meeting that they are having to plan how to thank the fans? Wait a minute! I looked at the stage and it was red with black writing. Maou theme colours!

Then I realised that Toma was not sitting somewhere in a studio, but sitting on the stage right in front of me. Like a mad woman, I grabbed Day’s arm and said, “Maou! Maou! Maou!” Pei Ying and Mei Chen were not fans of Japanese dramas so they didn’t really know why I was so happy.

My fantasy of meeting Ikuta Toma became reality! I don’t care if he’s sitting so far away. I actually saw him! Photo taking of the actors were not allowed but I managed to snap one photo with a pixelated Toma.

The major characters from the drama was there. Even spooky girl, the leading lady with HUGE eyes who I find hard to like because she has lines with Toma. Shoo!

There were many many people and I tried worming my way to the front. I ended up standing under the sun and sweating buckets It was very very hot so we decided to visit the building instead.

The lobby of TBS had huge posters and stand-up posters. It was a ROOKIES special day. I never knew why people liked ROOKIES> Everyone in it is so not good looking and its all about angsty high school boys with no love story plot. yawn

I tried calling Wawa to see if she’ll ask me to do anything crazy to attract Ohno’s attention. She didn’t pick up her phone, perhaps she’s in class.

Lots of photo snapping in the building. Then Day said we should go out and see if the live broadcast was ending.

It was, and we decided to go to the side of the stage. It wasn’t a good position because there was a huge board covering the actors. I could only see Toma’s hands and legs from where I was.

I did manage to worm into a space where I can see more of Toma. But the thing ended just as I was getting comfy. Girls were screaming “Oochan!” and “Toma!” Most of the people there were girls.

The actors waved goodbye and left the stage. Lots of the fans rushed to near the exit, but we stayed put to get a photo of the stage as proof of being there. We asked if the stage could be photographed and were told to go ahead.

Just as I was happily taking out my camera, the host announced that Toma and Ohno are going back on stage. Faint! I was standing so very very near him. It’s the idiom “a stone’s throw away.” If I threw my water bottle, it would hit Toma on the head. Ha ha.

But since the guys were out, no photos were allowed. However, Mei Chen who had her camera out to take a photo of the stage managed to snap a photo of the guys. Thanks a million!!! 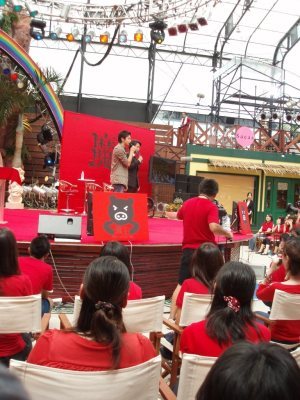 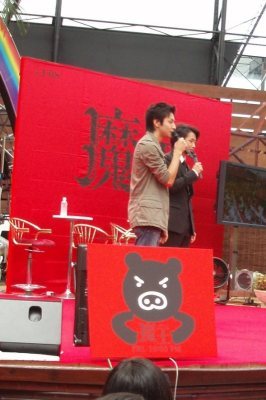 Very happily I watched Toma with his wrinkled forehead. Is it the sun? Or is he just in a bad mood? 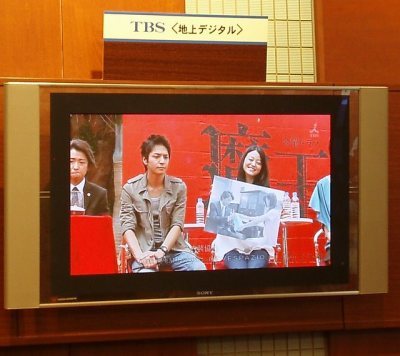 He and Ohno joked around on stage. I can’t really guess what they were saying. But I did catch that Toma’s starring in a musical that’s like Grease. He and Ohno did a sort of pelvic pushing dance, which made the girls scream, and which I assume is from Grease.

FInally it ended. The people in charge were taking off the stage rather too quickly. But we managed to snap pictures of it. Evil wins 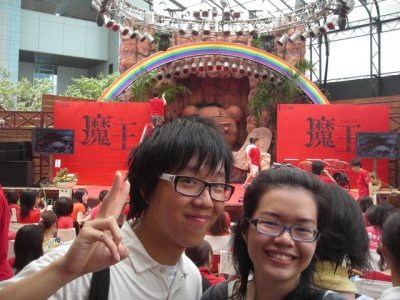