Didn’t copy the photos into my thumbdrive. Won’t be using internet during the weekend. Will update on Monday! :)

Pre-script, I’ve been living in the past. I thought today is Wednesday, but it’s actually Thursday. GAAA! That’s the problem of being on holiday. Sigh

Now that classes have officially started, I find it hard to update my blog. Class starts at 9.30am. By leaving home at 8:30am, I arrive in class just in time to catch my breath. Then it’s lunch from 12 noon to 1pm. From 1 to 2:30pm, it’s class. By the time we finish, half the afternoon is gone. And if I want to go out to explore, I’ll have to sacrifice internet time. AHH!!

Anyway, I’ll keep on writing, even if I do not have time to post. I do not have the energy to write my diary on paper so I might as well keep diary entries on my computer, isn’t it?

I woke up at 5.10am. It must be because of the sun, my room has two large windows and both have the morning sun. I like morning suns coz you’ll wake up.

I drifted back to sleep and finally woke at 7.10am to prepare. Small victory for me at 5 plus, I held my door shut when i heard the cat scratching at it! ha ha

I took an extra long preparation time today because I tried out the new eyeliner. My eyelids are troublesome because they’ll eat up my liner if I do it too thin. I looked like I had stage make up today. Ha ha

I had omelette and matcha toast. The toast was green in colour so I thought it was pandan. Ha ha, it’s actually green tea flavor but you can’t really taste it. It was interesting though.

I got to class in time, thanks to LC and Som, they were both at gates when I got there.

In class, the teacher gave us a form to fill in and to read out it as our self introduction. It’s the very first time I talked to a group of people in Japanese. Broken Japanese, of course.

Classmates are interesting people who like Japan’s food, and pop culture. Like me! We’ll get along well, won’t we?!

I’m in level 5 and it seemed scary but now I think it’s still manageable. Ganbarimsau!

Lunch, I had some weird root vegetable tempura with udon. The veg is weird! It’s grey in colour and tastes so weird. >o<

Class at 1pm was ok. History’s not too bad if you think of it as an endless story.

After class, Som and I went to Hakata. Som’s shoe broke and we went in search of a convenience store. In the end, she bought super glue that was really super! Her shoe was glued in less than one minute.

At Hakata station, I saw the yamakasa kazariyama. It’s HUGE!!!!

Oh, I also saw a lot of homeless people. It’s a shock coz they’ve never showed any homeless in dramas, I’ve not read about them. They looked really prepared with cardboard beds and bags of clothes. The thing is, they don’t really look dirty that you would think they are homeless. What is the government doing with this problem? Should I ask the people here about them?

Som and I went to Hakata Canal City. In the guide books, it looked impressive, but if you’re in it, it’s just so so. I saw lots of cool shops and the sales attendants were really hip. It’s scary!!!

After a stroll in Muji, we had coffee. 280yen coffee. faint, but we’re paying for the atmosphere too.

We then took a 100yen bus to Tenjin to take the subway home. I had to change to train after subway.

We saw ARASHI’s advert on the train. 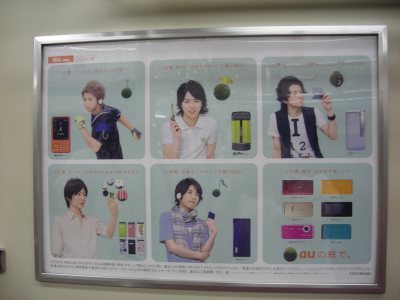 I reached home quite late, it was pass 7pm. A bit embarassed about this, if I had a handphone, it’ll be easier to phone home. sigh.

It’s still a bit hard to believe that I’m really really in Japan. Not home sick too. Have I grown up??

To self, need to buy a bus/subway card. Riding’s eating up my coins.

Keeping a book of account of expenses. Money’s flowing out. Sob sob