Inle Lake is the second largest lake in Myanmar. The estimated surface area of the lake is 116 km2.. During the dry season, the average water depth is 2.1 m, with the deepest point being 3.7 m. During the rainy season, water level can increase by 1.5 m.

Most tourists would stay at Nyaungshwe town and venture out to the river during the day. But I suggest staying at the resorts by the lake so that you’ll be in awe returning to the hotel on boat and admire the view of the lake early in the morning.

What to see at Inle Lake

You’ll need to hire boats or go on boat tours to see these sights since they are quite spread out. It’s unlikely that you’ll be driving your own boat so I’ll leave out the coordinates. 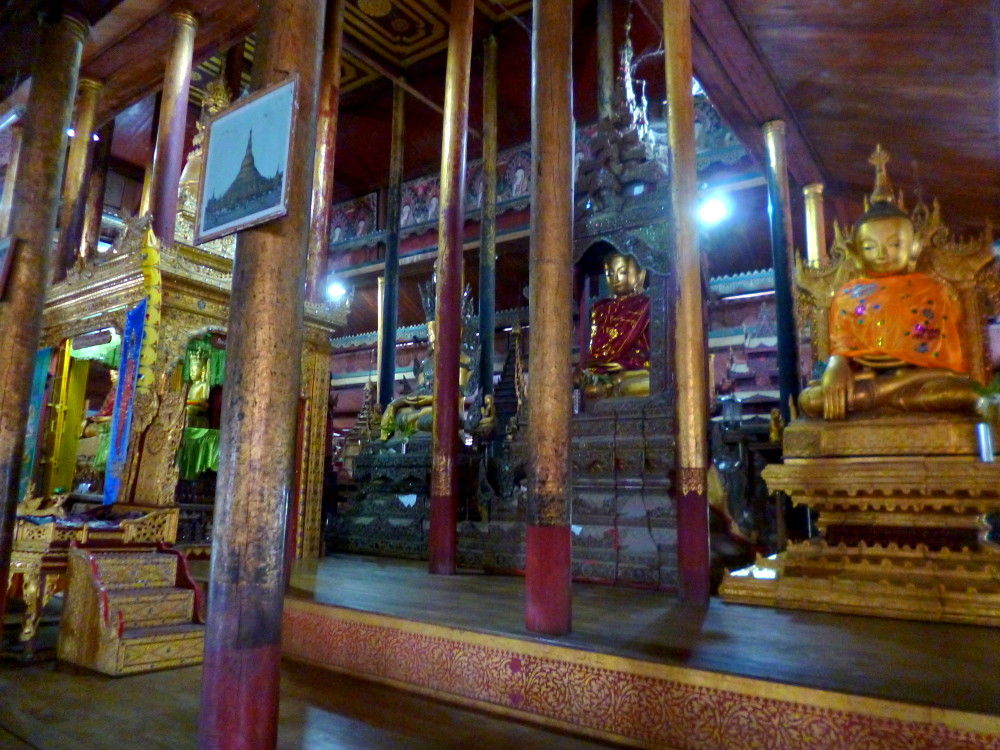 This monastery used to be called “Jumping Cat Monastery” but now there are no more jumping cats.

The cats used to jump through hoops. However, with too many tourists coming in, the kitties were exhausted from all the show so the monks stopped letting the cats perform.

The monastery has a collection of ancient buddha images made in different styles.

Behind the monastery, you’ll get a good view of some of the floating gardens. 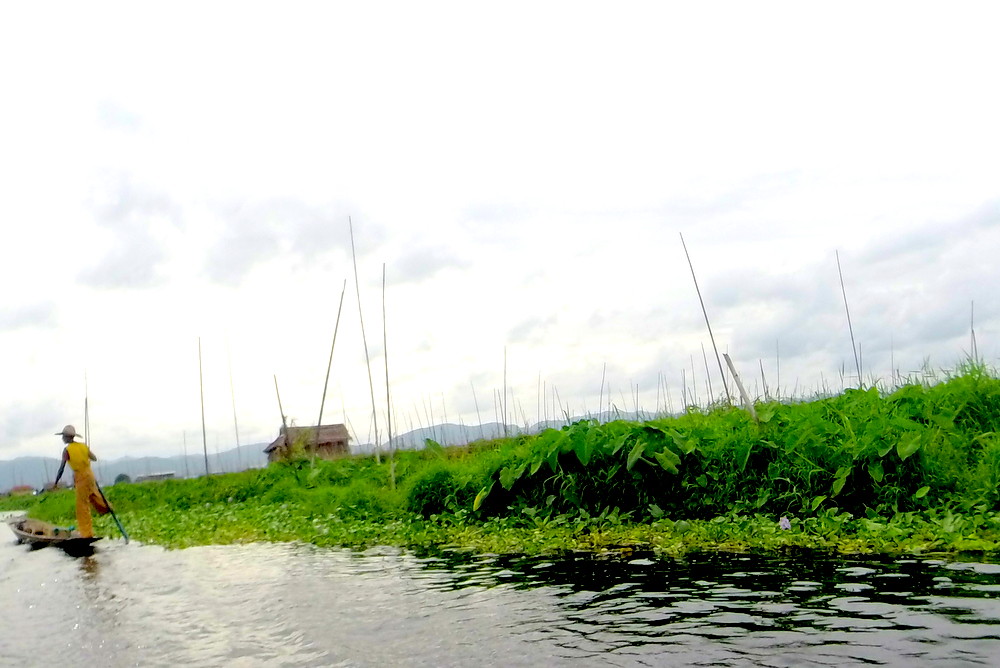 It’s better to call these “Floating Plantations” since they do grow a lot of fruits and vegetables. The farmers gather clumps of water hyacinth and other lake debris into rows then secure these to the lake bed with bamboo poles. They also pour mud from the lake as fertilizer. They then grow their produce on these beds.

The floating beds would rise and fall according to the water level so there’s no worry of flooding. I think it’s very ingenious of them to come up with such a system.

Still, I saw a farmer spraying something onto the plants (while on a boat) so I can’t really say that everything is organic. 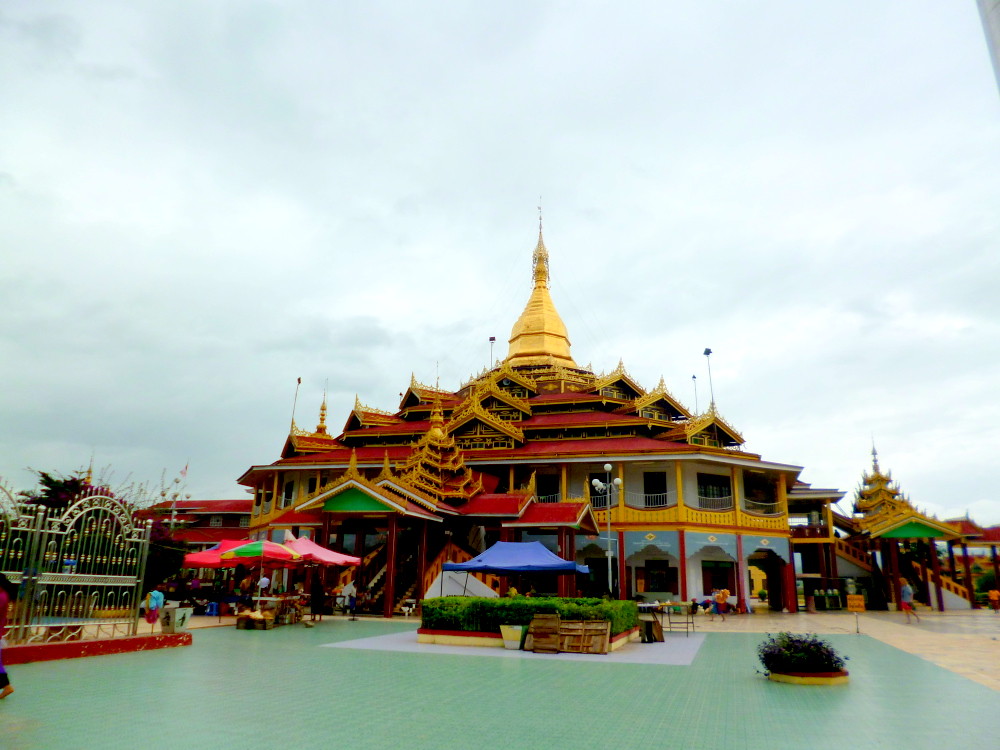 The pagoda houses five ancient buddha images that are not recognisable because of the layers of gold leaves stuck onto them. 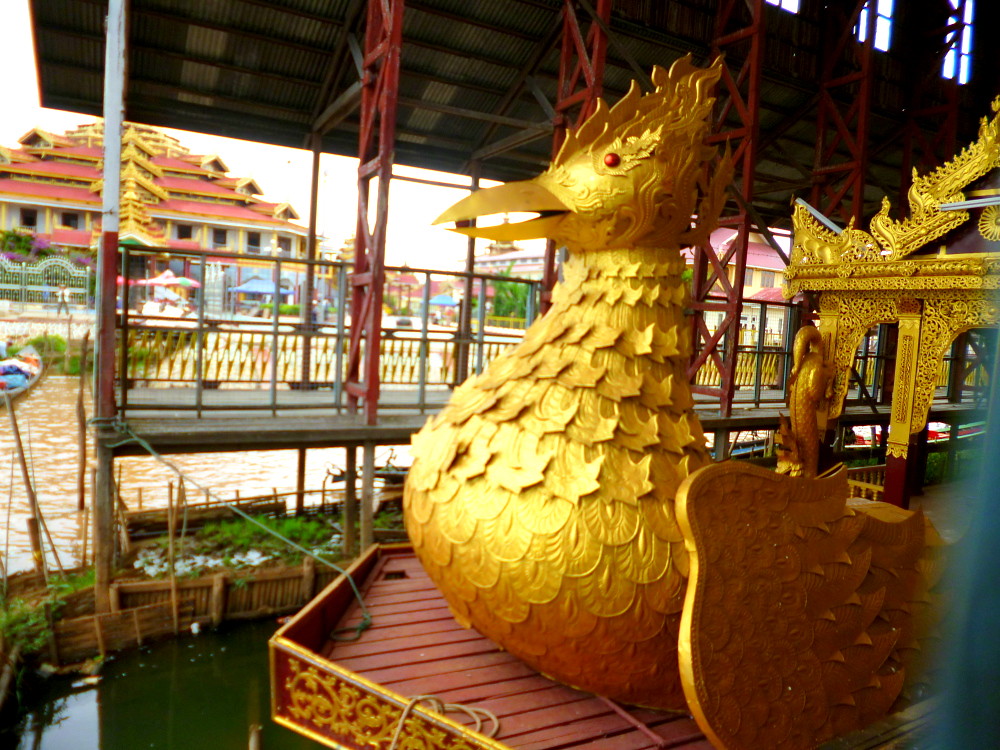 Right across the pagoda are several floats and boats used during Phaung Daw Ooo festival. The bird float is particularly impressive.

There are many markets going on at Inle Lake at different days of the week. This market near Phaung Daw Oo Paya is held every five-days. People from the mountains would come down with wares to trade.

Fruits here are cheaper than Yangon when they are in season. I bought a juicy mango for 64 cents in July. The ground can get very muddy during rainy season so be sure to not wear your nicest shoes. 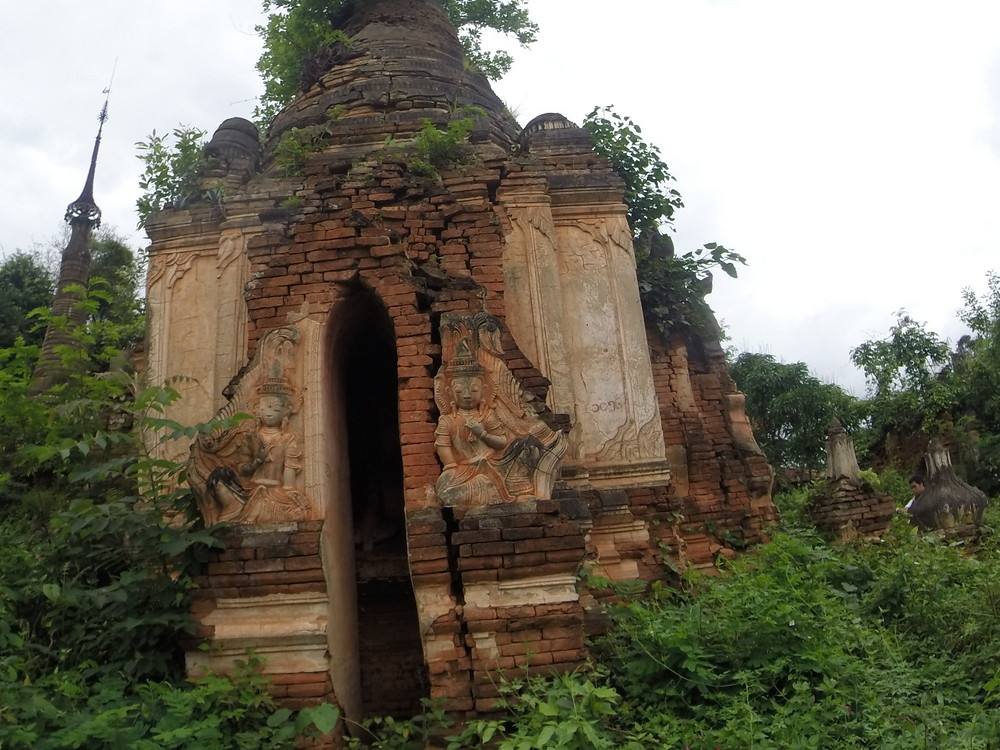 Our guide called this place “Mini Bagan” because of the many pagodas. Most of the pagodas from long ago are crumbling and draped with overgrown vines. There seems to be a lot more modern pagoda than antique ones here. 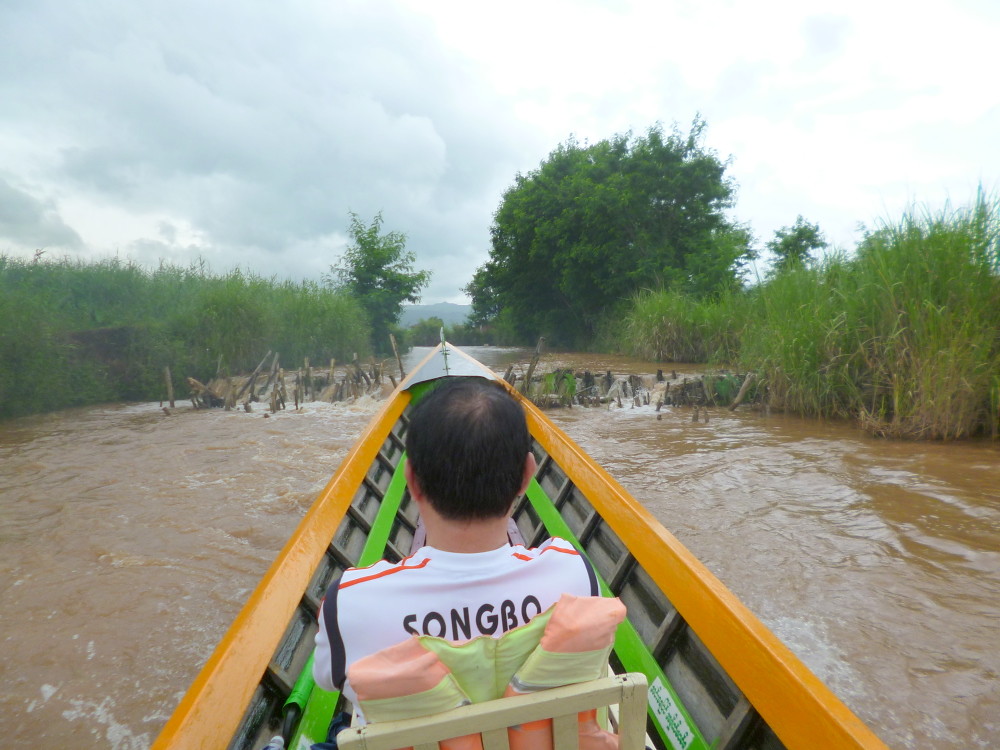 The journey up here is more excited. You need to go upstream to reach this place. Every once in a while, your motorboat comes to a mini dam with a tiny entrance just wide enough for the boat. The water level ahead looks higher but the skilled motorboat men is able to slice through the water without causing any bumpiness. 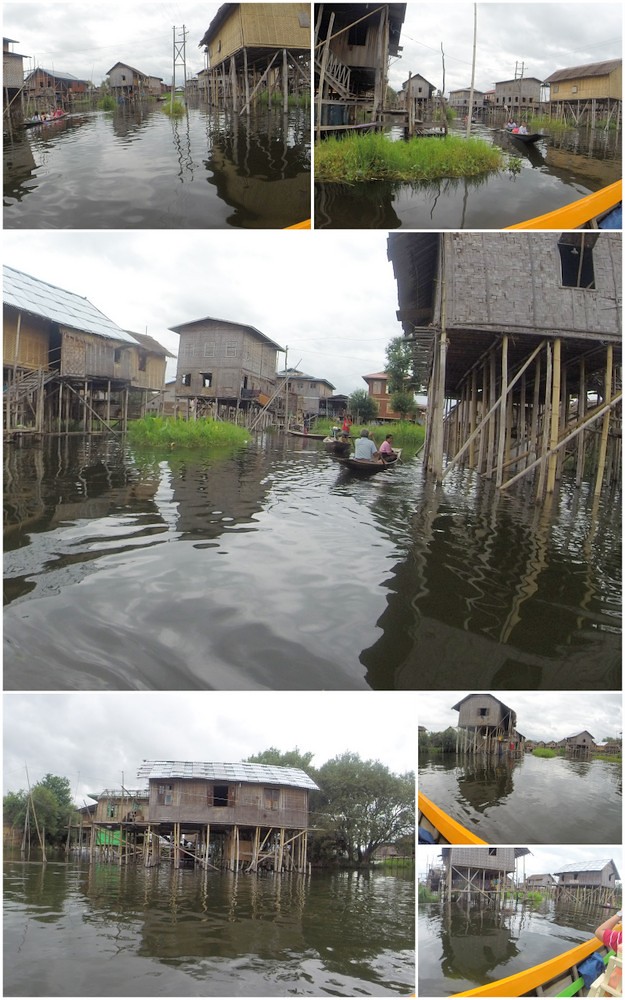 The boat tour would most likely bring you to the neighbourhoods at Inle Lake where you get a glimpse of daily life. The houses in the photo are built on bamboo stilts and some houses have garages for their motorboats.

In the evening, you will see children taking their baths in the water, right at the bottom of the house. There are also small boats rowed by what seems to be equally small children. 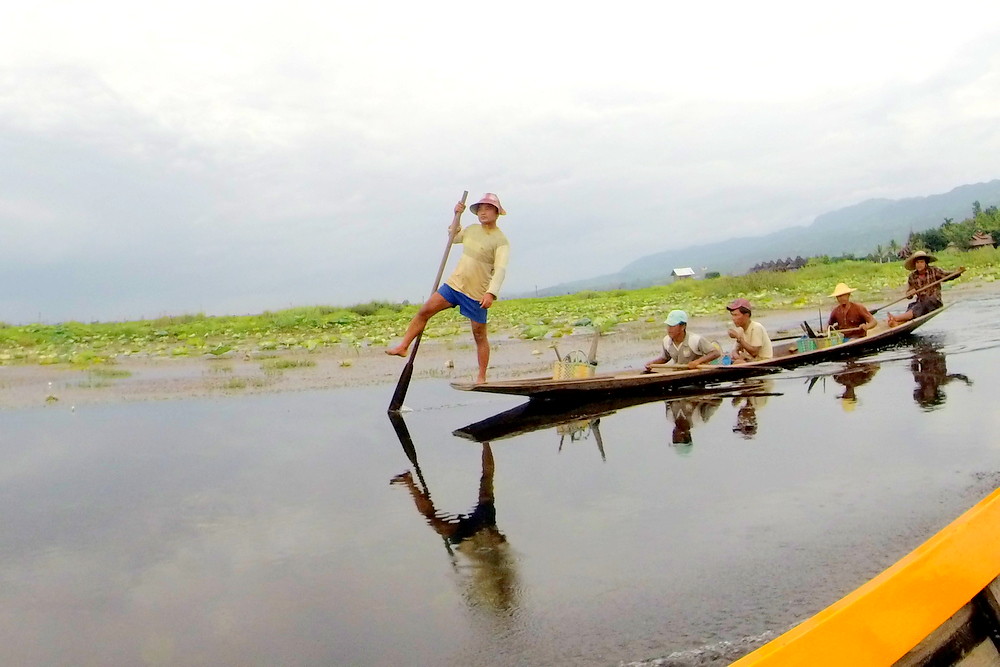 Not exactly a site per se. The fishermen (and sometimes oarsmen) of Inle Lake are famous for their cone-shaped fishing net and boat rowing skills (oddly called Stand Up Paddle Inle-Style on some website).

There was one particular guy in the middle of the lake who seemed to be there just for tourists to take photo. He stands up on one leg and poses. Sometimes he poses with what seems to be a dead fish.

Be sure to give Inle Lake two days worth of time because there are many things to see.

If you cram everything in a day, you’ll find yourself falling asleep on your boat ride.

Many thanks to  TripZilla and Myanmar Airways International who made my trip to Myanmar possible. All comments are my own.

4 thoughts on “What to do at Inle Lake, Myanmar”