After only about 4 hours of sleep, I woke up to prepare for the day at Iguazu Falls. How Argentinians manage to party until the early morning and go to work immediately baffles me.

Breakfast at the hostel was about as bad as the one in Buenos Aires, especially since so many people were fighting to eat the last fried eggs.

It was drizzling the whole day. Combined with the cold weather, it was quite unbearable. An entrepreneurial local man was selling ponchos at the gates of hostel. He was selling one for 15 pesos, promising that it would be more expensive inside Iguazu Park.

When breakfast was done, we were sheparded to the bus. It didn’t take long to reach the park. By the way, Iguazu in the local language means Big Water.

Our group was divided into two for the waterfalls activity. We were taking a speedboat on the Iguazu and getting as near as we could to the falls.

All of that sounds exciting but in reality, we had to walk in the rain (with poncho and umbrella) around for quite a while in the wet footpaths. The purpose of the walk in the park was never revealed. 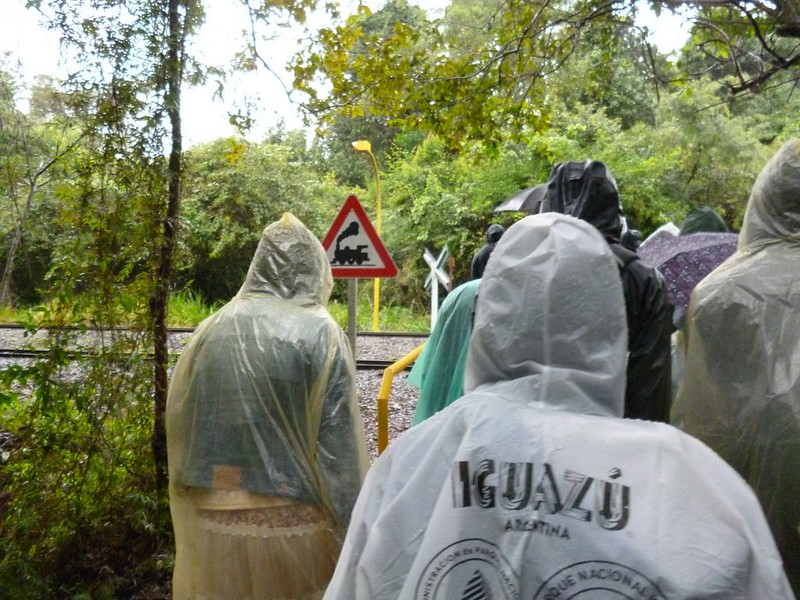 Finally, we were brought to the gates of the Grand Adventure. Everyone was given a ticket to board the truck.

As usual, I managed to lose my ticket. One minute I was holding it in my hand, 15 minutes later I could not find it anywhere near me. It was a bit distressing.

Luckily, one of the organizer had a ticket for two so I was allowed onto the truck. The truck didn’t go straight to the falls. Instead, a blond man in a raincoat boarded and started explaining the different trees in the park.

Sitting on the wet seat, in the rain, we listened as he pointed to different trees. I looked out of my wet glasses and couldn’t see much except rain drops.

We finally reached the waters. Here, we were given a bag to put our belongings into. The bag’s opening is closed so no water goes in.

The boat was rather large and would probably fit 60 people. I manage to snag a whole row to myself and I sat at the right side of the boat.

Since it was raining, the waves of the river were quite violent. Luckily, our captain was able to steer in the terrible weather and in the opposite direction of the tide. We had a lot of fun.

Imagine sitting in a boat on a massive river with reddish-brown water. On the sides of the river are hillsides with trees and some with mini waterfalls caused by the rain.

The wave crashes into your boat but the captain manage to swerve the other waves. As the boat sped on, you finally reach the waterfalls.

From far away, tons of water falls, causing a white mist. In front, you see what seems to be the end of your part of the river. You hope that the boat does not go too near the edge and fall down.

The boat goes near the mist of water and everyone screams as one wave crazed violently at the side. More waves come but the boat keeps afloat.

Then the captain steers the boat to the middle of the river so people can take photos of themselves standing on the boat with the falls in the background.

Afterwards, you are told to keep your camera away. The captain steers the boat to another part of the falls. This time, you actually feel the water on your face. A wave decides to join you at your seats and splashes in. More screaming ensues.

After what seemed like 5 minutes of battling with the waves, the boat returns to the more calm center of the river. Everyone breathes a sigh of relieve and laugh out loud from adrenaline.

By the time the boat ride was done, I was rather soaked from waist down. Unfortunately, there was a lot more walking.

Metal walkways and railings were built at the top of the falls so tourists could take pictures. We walked on a lot of walkways and took a lot more photographs.

It’s awe-inspiring seeing so much water pouring out of the riverend. While on the bus, one of the tour mates sounded what I was thinking when we saw the falls, “Makes you want to jump from the top.”

I’ve always had a fascination with falling. If I had nine lives, I would spend about 8 of them falling down from all sorts of places.

Lunch was eaten at the park. There was more walking and waiting in the cold.

After Iguazu, we reached a spot on the Argentinian side where we could see the banks of Brazil and Paraguay. My camera misted up because some water went into the lens so I only had photos on my phone.

[Watched a culturally-incorrect James Bond movie while writing this post in 10 degrees Celcius outdoor. I rather enjoy seeing my breath when I breathe out through my mouth.]