Vietman will always have a place in my stomach. It was the place I first started liking raw vegetable, ate banh minh, slurped good pho and discovered my love for buttery Vietnamese coffee.

So during my trip to Hoi An last week, I ate like the glutton I am.

Thought with all my cycling in Hoi An, I probably would have dropped one dress size. Unfortunately, my body believed in replacing all the muscle and fats I’ve lost in case of a zombie apocalypse so I probably ended up half a dress size larger.

I’m not sure if it’s the food portion or my vigorous cycling, I was really really hungry on Day 2 of my Hoi An trip. Even after a meal, my stomach would send signals to my brain saying: Hey! You should put more food into your mouth.

My brain obeyed and I ended up eating double portions of everything: banh mi (one pate and one plain) for tea time and a dinner for two at Morning Glory. Yikes! I was very pacified after the meal at Morning Glory that my stomach stopped complaining and was busy digesting but the feast went on.

Enough about my appetite, let me show you some of the yummies I had.

A famous noodle dish in Hoi An. My sister and I were trying to figure out what Cau Lao might mean in Chinese. Translations say “dry noodle” and she wondered if it’s “gon lau”.

The better Cau Lao I had was in the central market, eating next to locals. I was charged the price of a big bowl which I think is my tourist tax. Still, it’s only 20,000 dong (S$1.25).

The noodles are flat and translucent. There are slices of pork and pieces of pungent leaves–a taste I associate with Vietnam and have grown to love.

However, the best cau lao was made by the lady running the homestay. I had two servings and it was terrific!

My first Banh Mi in Saigon took me by surprise: fluffy, crunchy, tough and airy. A wild combination for a small baguette.

Unlike the jaw breaking French baguette, banh mi is more airy but with an equally stubbon but crispy crust.

The banh mi that I eventually ate in Hoi An was from a stall which legendary Anthony Bordain visited before. The reviews on TripAdvisor raved on and on. Despite just putting my head on my pillow and the sun being bright and strong at 2pm, I decided to find the famous stall and stuff myself with bread.

Banh Mi Phuong is not too easy to find. It’s next to shoes shops so you might miss it. At the junction of Nguen Duy Hieu and Phan Boi Chau, head towards the bridge but look at your right. The stall is right next to the small pedestrian entrance to the cloth market.

I bought one with pate and two empty ones to chew. The lady was puzzled why anyone would get empty ones when her fillings are to die for. (I didn’t dare tell it’s for my food baby–aka tummy.) All that bread for 25,000 dong. Amazing!!

I found a picnic spot opposite Hoi An town. It was a not too romantic place, perfect for my not-too-romantic face stuffing.

The sandwich was alright, yummy but not out of this world delicious. I wouldn’t mind having it from time to time. But the filling were substantial.


I’m not a pho connoisseur but Hoi An pho tasted different compared to Saigon pho. The stock less “busy” with clearer soup.

Before starting my meal, I drown the vegetables that came with the noodles. After drowning them in soup, they become half cooked and more edible. The flat noodles were perfect with the clear soup. 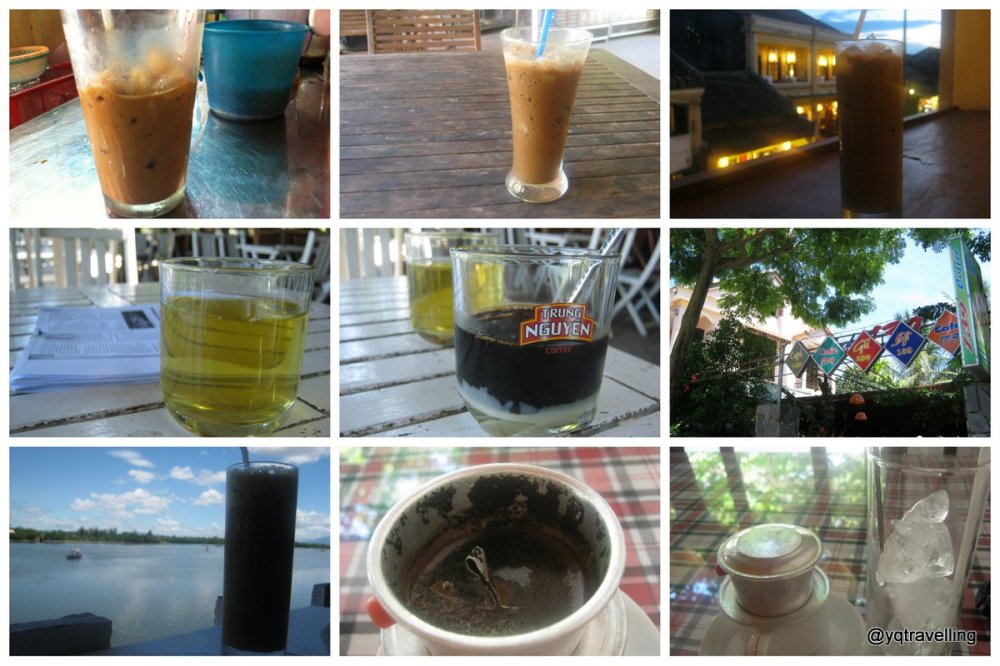 I had coffee at about every rest stop, coffee shop and restaurant. I was charged all sorts of prices from 9,000 to 25,000 dong. I had 3-in-1 mix, pre-made and metal filtered coffee.

The best coffee place for Vietnamese coffee in Hoi An is at Cafe 139, on Nguyen Duy Hieu. It’s a cafe under a house, next to the ditch/river. For only 10,000 dong, you get a buttery iced Vietnamese coffee *and* a glass of sweetened tea.

The serving is very petite–the regular Vietnamese size–while the ice cube really large. I usually read while I wait for the ice to melt before taking careful sips.

This edition of #FoodFri features part 1 of my Glutton in Hoi An post. In the next edition, I will showcase three (or more) restaurants I visited. Stay tuned!

What is your favorite Hoi An dish?