During my San Francisco trip, I had the chance to stay at two different hostel. Well, “chance” doesn’t really describe my situation. I had to book separate places because I misinterpreted my work schedule.

Since I had already booked Pacific Tradewinds Hostel for seven nights so I thought that I should give San Francisco Fisherman’s Wharf Hostel a try for my first night in San Francisco.

This is the Fort Mason branch of Hostelling International’s three hostels in the city. I didn’t pick the other two because they seem to be in shady locations. For a solo woman traveler, safety is always a priority.

I got off one bus stop too early and had to drag my luggage up an extra slope. (I should have stopped at Van Ness instead of Polk.) 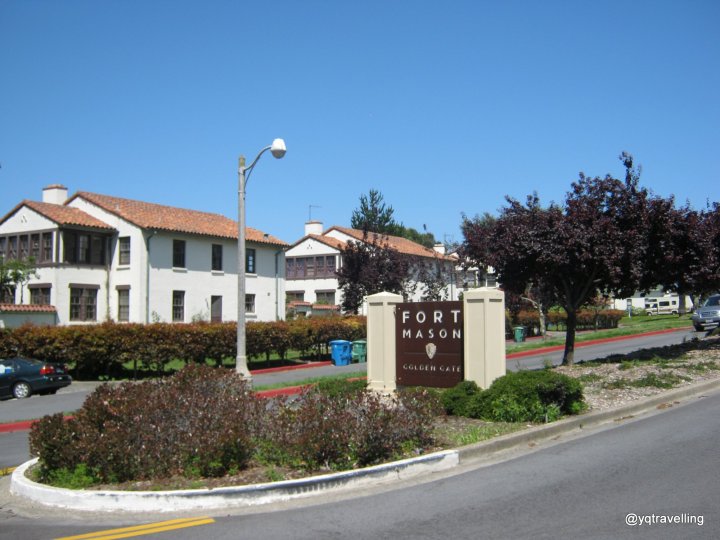 After I reached the Fort Mason entrance, there was another slope to conquer. The slope’s not too bad and there’s a beautiful community garden along the way to distract me. 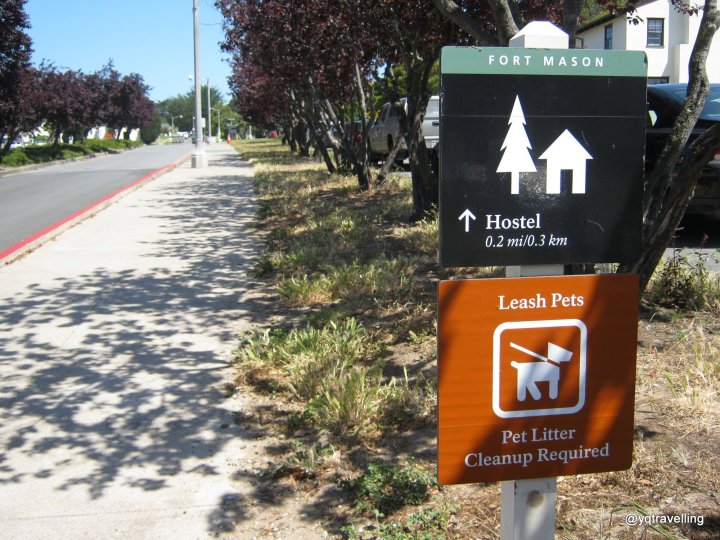 The hostel front desk is on top of the hill. There’s plenty of parking space around. 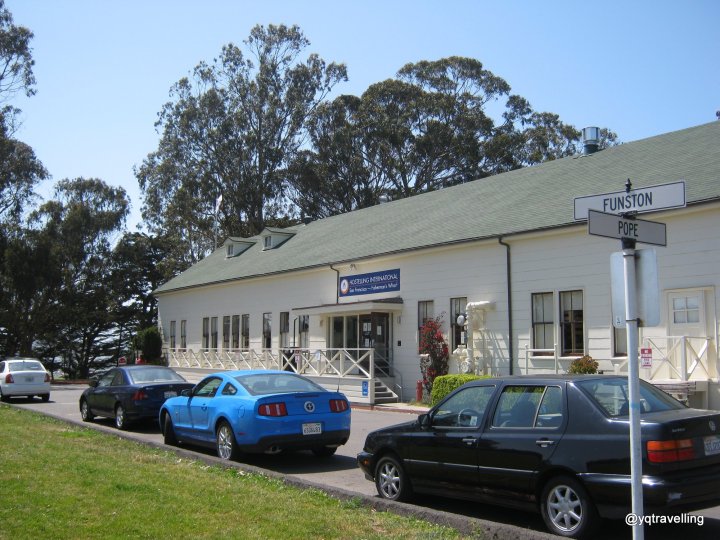 I lived in this building. The stairs leads to the breakfast room. 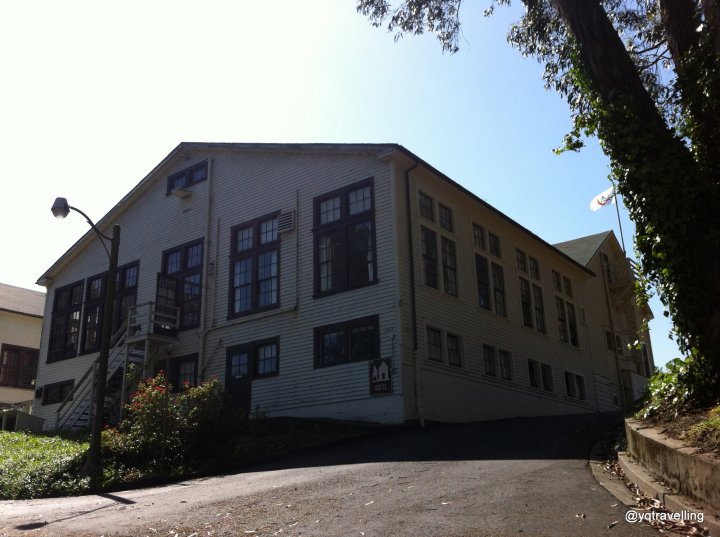 The front desk person is curt but I don’t expect hostel staff to fawn over me so it was the right amount of civility. She used a marker to write that day’s date on my receipt for use as an entrance pass and my breakfast slip.

I was lucky enough to get one of the smaller dorm rooms. There was only six beds instead of some other’s 10 to 12. There’s a radiator in the room for those cold San Franciscan nights. 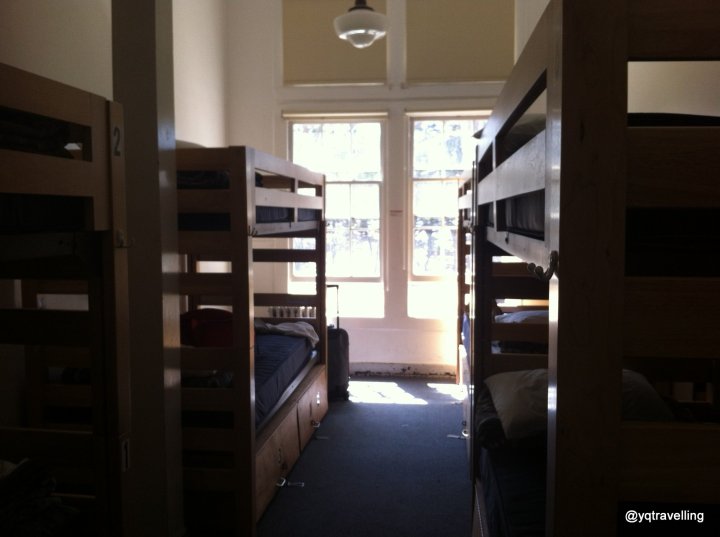 I had the lower bunk which is good because there’s no ladder to climb up the upper bunk. You’ll have to step on the rungs (which were quite high). Under the bed is a luggage space which I locked with my padlock. I couldn’t find a power point in the room. 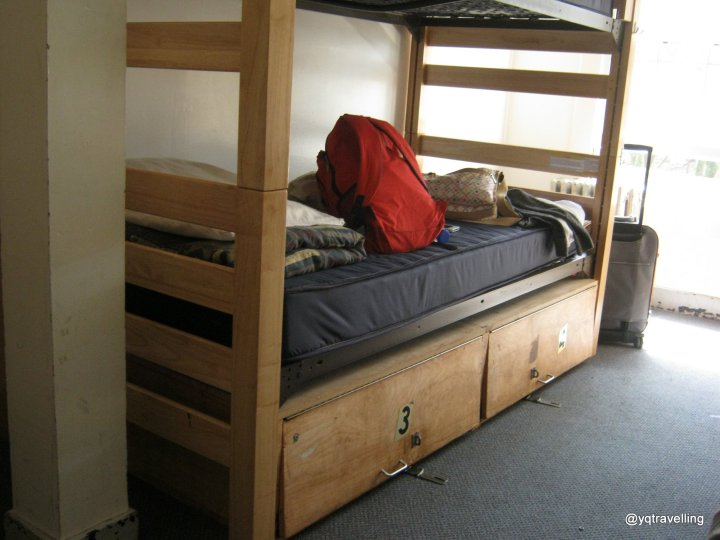 Room access is with an electronic card. My Room 13 was right outside the bathroom so it was convenient for showers. The bathroom was bright with three showers with three toilets.

There’s a theater and a large kitchen. I did a bit of blogging in the kitchen since there was Internet connection there.

Hostel with a view 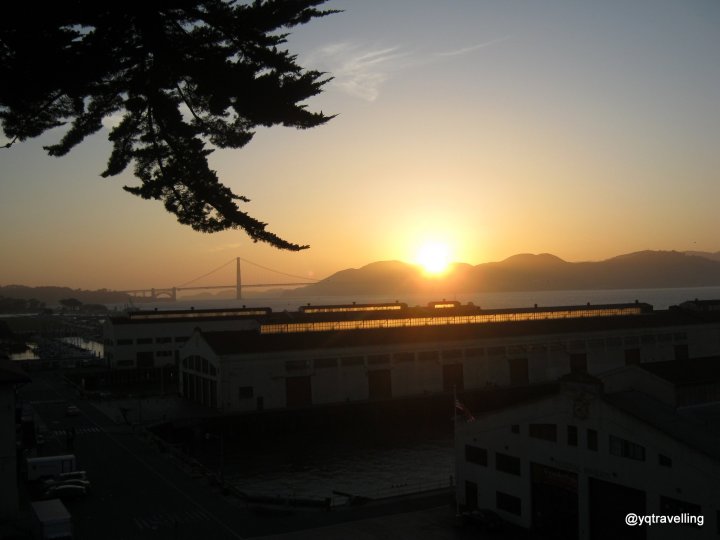 The view from the hostel itself is not too fantastic as it’s covered up by trees. But if you stand at the edge of the hill, you’ll get a great faraway look of the Golden Gate Bridge (if the weather is gracious with low fog).

In the mornings, cyclists will ride past the hostel since it’s along the way to the bridge.

Breakfast was great. I had a bagel with peanut butter, a fruit (which I forgot to take away), unlimited coffee and juice. The breakfast lasted me from 11am to 3pm. 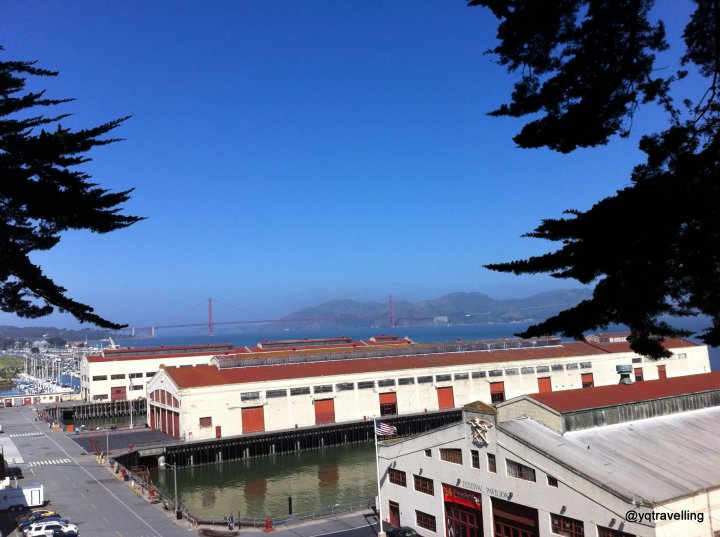 One thing cool about Fort Mason on Friday is Off the Grid. At least there was one the Friday I was there. 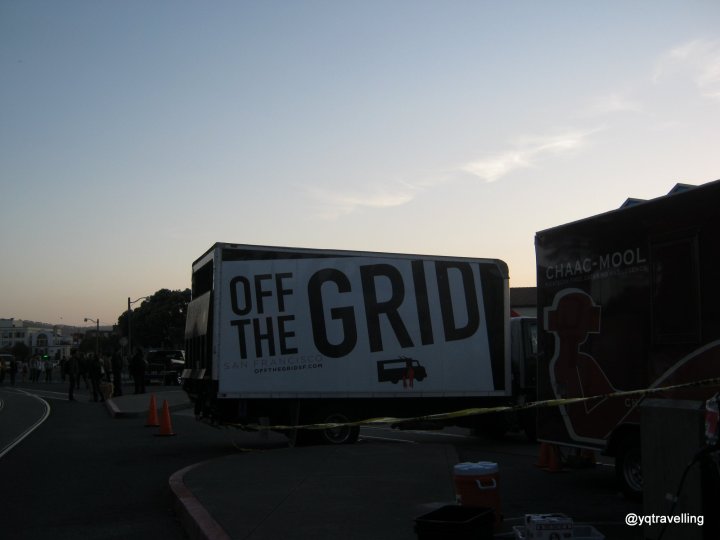 The event brings the street cards and food trucks around the city in a central location. Head banging music and crowd expected. I had the chance to try out the Creme Brulee Cart there. 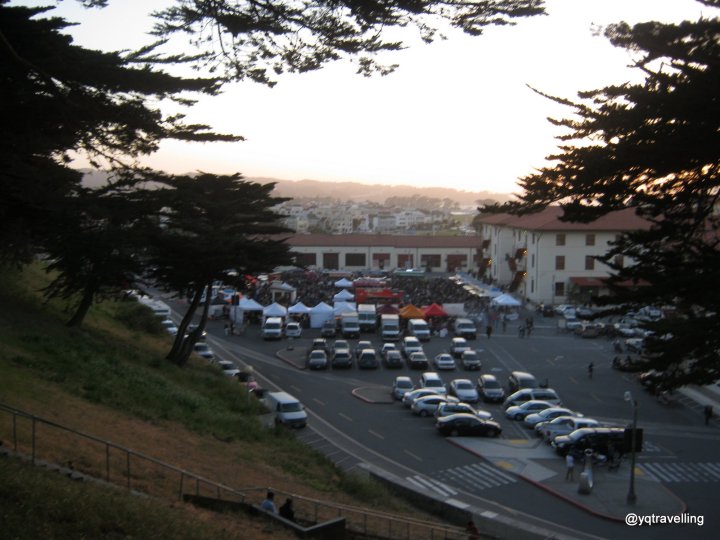 Pro: Good view, great breakfast, space, cheap (US$29.99), safe area
Cons: Far from most sights, a bit of a trek from nearest bus stop, slopes, no power point in room