I’ve bought a return trip ticket to KL for the Feb 11 weekend. This will be my first time taking the overnight train in Malaysia.

I named the trip the “KL light bulb trip” because I’m joining N and her boyfriend (whom I’ve not met) who are both coming in from overseas. “Light bulb” in colloquial Chinese means a third person among a couple. (Coincidentally, my first overnight train trip in China was with N.)

Since I call myself a frugal traveller, here’s a tip for those who are considering taking the train from Singapore to KL (or even Thailand). “Leave from JB SENTRAL instead of Woodlands”.

I bought my return trips in two stages: JB-KL and KL-SG (Woodlands) which costs only RM79 in total (RM39+RM40). You’d pay double if you bought a SG-KL-SG ticket. Here’s why: 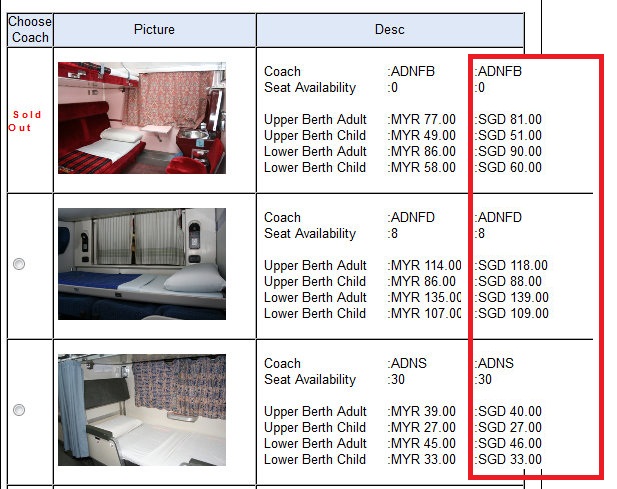 By taking a bus ride (Here’s another tip about which bus company to choose) across the bridge, I’ve saved more than RM40 one way on the second class sleeper!! Why the hell did KTM started that strange pricing to begin with???!

The train also saves me money because if I leave Singapore by bus around 11.30pm, it would cost me S$30 (instead of RM39 on the train). Sure leaving from Larkin, JB would save me money but JB’s night reputation isn’t terrible good.

With the night trains, I’ll be able to theoretically zzz during the night and reach in the day instead of wasting my day on the bus.

UPDATE: My post on the train trip is up.