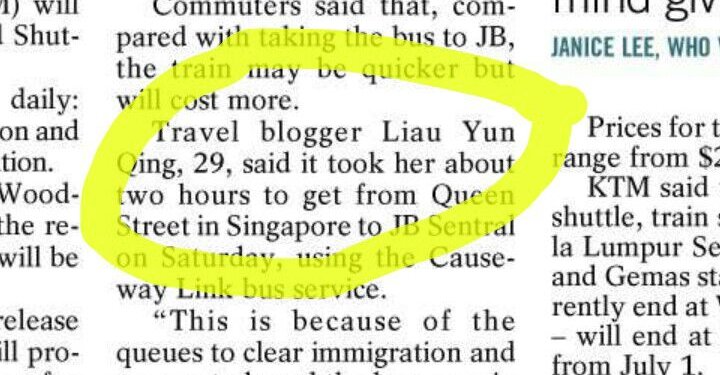 On Tuesday, the Malaysian railway company announced that it was launching a new service called Shuttle Tebrau which will link Woodlands Station to JB Sentral.

A reporter from local broadsheet Straits Times found me through my most popular post and wanted to ask for my comments on the new service. Thankfully, I caught his e-mail in time as my e-mail notification pinged while I was staring at my phone.

I prepared for the interview by reading on the background of the new service. I even jotted down “juicy” quotes that would make me look slightly unhinged but endearingly colorful to the audience.

The reporter called and we had a 12-minute chat during which I sounded bipolar. I was totally against the service at one point, talking passionately about its cons but at another point, I discovered its merits. I couldn’t make up my mind.

Still, the reporter summed it up in two sentences and made me look like a very practical traveller (which I am).

I did request that he use “travel blogger” as my job title as “marketing exec” seems like a totally irrelevant commenter on this subject. He obliged. Thank you, good sir.

The report came out on Page A2 on Straits Times and also on My Paper. I can now officially say that I was on the news as a travel blogger.

You can read the full report and my not-juicy quotes on My Paper “New JB-Woodlands train service from July 1”.