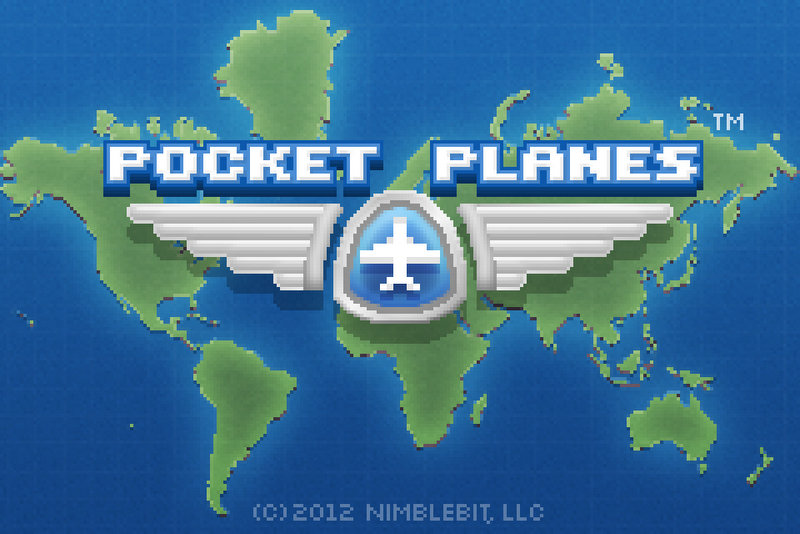 While I do review travel-planing apps (erm.. Flight Lover only for now) here, today’s app is slightly different but still travel-related.

I started playing Pocket Planes last Friday. It’s created Nimblebit which also made Tiny Tower. This explains why I could not stop checking my phone and tapping the screen like a zombie.

The game is not as simple. Picking it up was frustrating since I did not know what I was supposed to do.

You need to fly passengers and cargo to different destinations on the map. First, you choose a country. I picked Japan because I love the Land of the Rising Sun. (Interestingly, my colleagues all chose Japan too, not sure why.)

Tip 0: Pick a region that you are familiar with
->I chose Japan because I know the country quite well. Plus, the locations aren’t very far from each other. 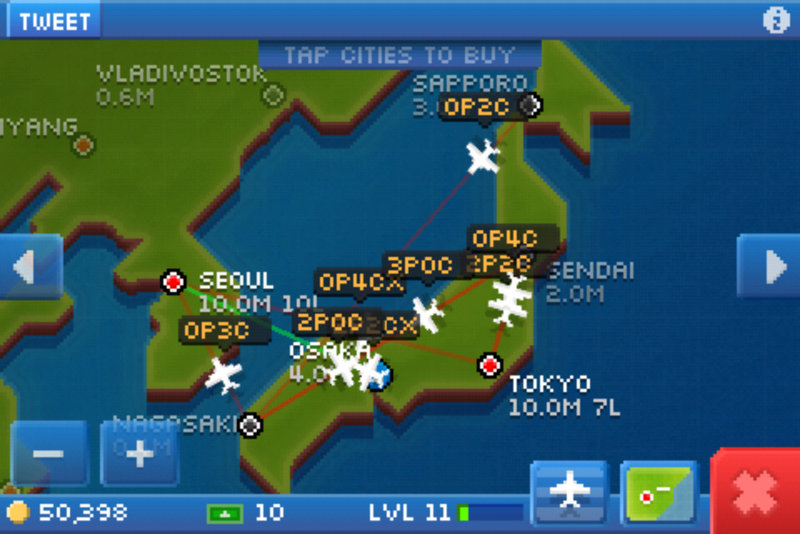 Then you start flying cargo or folks across the country, earning bitcoins and bux along the way. 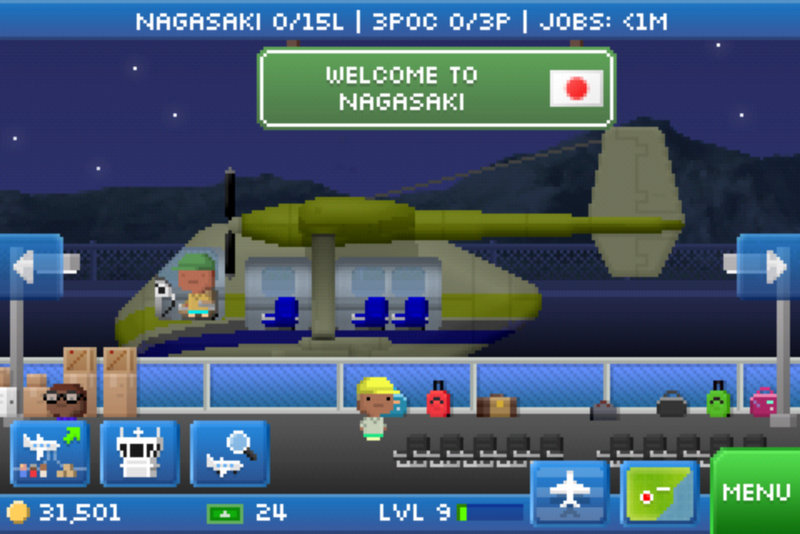 Why is it addictive? Like Tiny Tower, there’s a waiting element then reward. Then there’s the panicking part where I fear that I am not earning all the bitcoins I can while I am awake.

The bitbook is totally cute too. And it has not reached the stage where I’ve read every single entry and its variation. 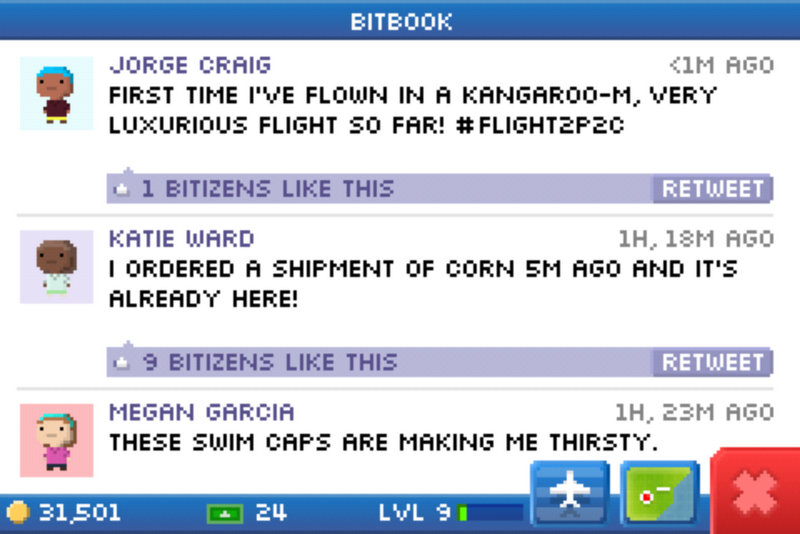 anWith all that playing, I’ve figured out some strategies that work for me. But since I’ve been playing for a while, I’m not sure which tip is for beginning player and which for more advanced player as reference.

For example, I assume you know that bux (the

One important trick in the game is combos (explained in Tip 2), so I name my planes based on their functionality.

In case you are not joined at the hip to the Internet like I am, it’s supposed to be c-c-c-combo breaker.

Combos work like dream jobs in Tiny Tower. You earn an extra 25 percent if your cargo/passengers are heading to the same location and you fly them there.

For more advanced players, planes have different classes and some airports don’t take classes higher than theirs. Example, only Osaka, Tokyo and Seoul are able to receive Class 2 planes.

Tip 4: Don’t bother with small airports
Once I saved up enough bux, I started buying airports. Unfortunately, an airport like Vladivostok with a population of 0.6M means my planes are stuck there with nothing to send.

I usually end up flying with an empty plane from Vladivostok to busier airports. I had to close down Vladivostok, wasting my upgrades and airport buying fee.

Now that I have the three major hubs, Osaka, Tokyo and Seoul, my planes fly almost none stop between them.

Tip 5: Layover’s your other best friend

A combo flight is the best but you can’t get one most of the time. I would fly a plane with passengers or cargo that have different destinations and stop at the nearest. (You get the same money no matter how heavy your cargo is.)

At the new airport, I would offload my cargo so that other planes can have combos, or pick up cargo to turn my flight into a combo flight.

Does that make sense?

Since airplane slots cost bitcoins, it’s better to remove not useful planes to the hanger than fly one watermelon across the country.

Tip 7: Bring a charger
This is probably the most important tip for me. I cannot put it down and it’s draining my battery. ;)

Are you playing Pocket Planes? Can you share your tips?

There’s one thing you need to know about me. I am very stingy and it is very rare that I will pay for an app unless it is really useful.

I downloaded the app a long long time ago, hoping it would help me score cheap flights. Unfortunately, I haven’t bought any cheap flights using the app but I do have other purposes for it.

I use it mainly to check how low flights can go. I also use it to help friends double check if there are cheap flights around the period they want to travel.

The app will be useful for the casual bargain air ticket hunter (I’m among a semi-hardcore bargain hunter while a friend of mine is Level-999 in cheap airticket hunting.)

When you open the app, it gives a list of the destinations in its database as well as the cheapest flights. I love how the cover photos are changed from time to time, for example, the highlighted destination today is Sydney.

For this demo, I chose Kuala Lumpur as my destination as it’s one of the cheapest destinations.

I’m able to slide the slider (duh) to indicate how many days I want to travel. Please note that it includes the day you fly. For example, if a flight leaves the airport at 11pm, it counts as a day.

The return time is actually the hour you return to your country of origin. That is helpful for those who don’t want to guess when they reach home. For me, I would prefer the timing of the flight back instead so I can see how many hours I can still have fun.

You can also select the date range you want which is helpful to zoom in the long weekend dates. The little red triangle on the upper right of the price shows that the trip involves a weekend–super!

After you’ve selected the best price, head into the date and it’ll show you the details of the flight as well as the checkin time (so considerate of them!)

The “Book” button only helps you call the airline while the “Share with friends” lets you tweet/Facebook/e-mail others about the cheap price. 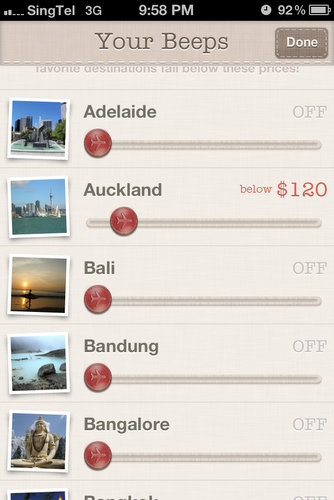 The app also has a neat “Beep” mode which will alert you of deals that have dropped below the price you’ve indicated.

Everyday, around 9am, it will deliver a message alert if the tickets have fallen below the price you like.

Even thought I’ve switched this function on, I always feel annoyed when it reminds me of a cheap flight because I can’t go on a holiday now 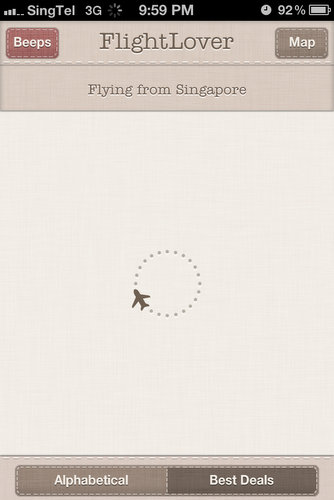 The design of the interface is really clean and beautiful. There is an airplane flying in circles when it loads a page. A sad emoticon appears when there is no connection.

The companion Web site has the same functionality but with limited travel dates. The app can be found on the App Store.

FlightLover Singapore
Developer: Handstand (The folks who brought you gothere.sg)
Price: S$2.99
Version Reviewed: 1.27
Device Reviewed On: iPhone 4
iPhone Integration Rating: 3 out of 5 stars (Not integrated into Twitter–iOS 5 functionality)
User Interface Rating: 4 out of 5
Re-use Value Rating: 5 out of 5