Aguas Calientes is the town where the train to Machu Picchu stops. The name means “hot water” or “hot springs”. I have been in love with hot springs ever since Japan. Even though we have hot springs in Sabah but those are a bit lame as the water is piped into little pools.

Still, I had a whole day in Aguas Calientes with no plans so I decided to give the place a go. After moving my things from one budget hotel to another at 9:30am, I brought my shampoo, sarong cloth and camera to the hot springs.

To reach the Baños Termales (Thermal Bathes), walk with your back to the train station. You will likely see signposts along the way. Keep to the right where the slopes and stores are (not along the river) since the entrance is there.

Before the entrance, there are shops renting towels and bathing suits. I’m not sure about the price but you can get them there if you need.

Entrance fee is 10 soles but you will need to keep your things in the lockers which costs 1 sole. The lockers are further in where the pools are.

There is a slight walk from the entrance to the pools. I haven’t been in good shape so I was huffing and puffing halfway up the slope.

The sight of the pools surprised me since I thought there was more walking. From above, the pools looked like they contained dirty murky brown water. Eek. 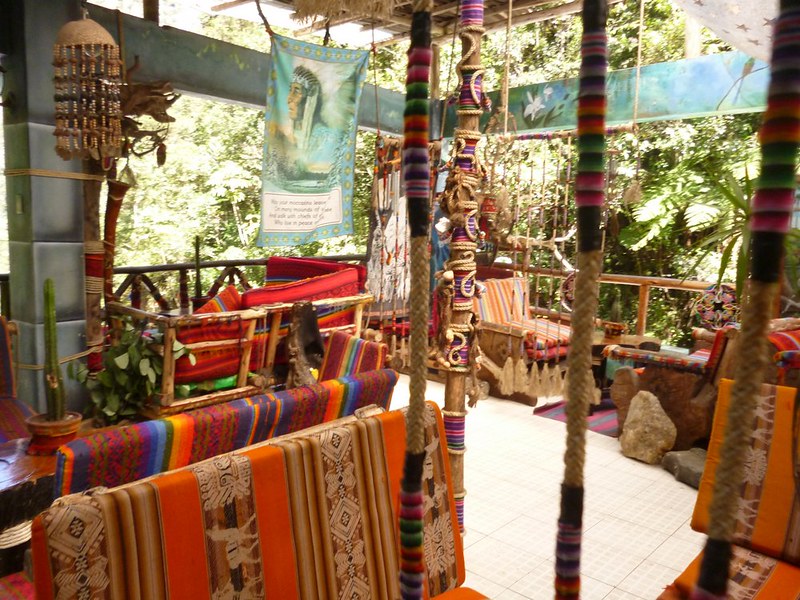 After changing into my swimwear (this is not Japan so no naked onsens, people!), I brought my plastic bag of shampoo, camera and watch to the pools.

At first I checked out the “showers” near the entrance, the water was freezing. Someone above shouted at me and pointed to the other side of the pools.

As I didn’t wear my glasses, I had to walk up to the old man, tell him I cannot see without my glasses and followed his instructions to go to the other side where there is hot water.

A local lady was washing herself at one of the three tiger head spouts. I turned on one of them and laughed when hot water came gushing out.

The lady said, “Agua thermal!” to tell me that it was hot spring water. I nodded and started washing myself. After the shampooing, I checked out the pools.

I found one of the medium-sized pools empty so I got in. The water wasn’t as scalding hot as Japanese hot springs. It was about body temperature.

I realized that the dirty-looking water wasn’t filled with grime from Inca Trail hikers as I originally thought. Instead, it could have been from the minerals in the spring water. Or at least I hope it was.

The pool is too deep to sit in but too shallow to wade so I half-stood by the faucet with hot spring water, allowing the water to trickle down my face. (It was actually too hot to do that but I want spring water on my face so I did it anyway.)

From the pool, you can see the mountains surrounding the little valley. It’s quite beautiful from there.

The floors of the pools are filled with pebbles which I think are to prevent people from slipping on the smooth tiles. Or it could be for a natural foot massage.

Then I felt that the water was too chilly and shifted to one of the larger pools. I was in it until the sun was a little too high in the sky and I could not find a shade.

I moved to the kiddie pool which allowed me to sit on the floor and soak my whole body.

There was one old lady, some kids and a young mother (I assume) in the kiddie pool with me. The kids splashed playfully while I continued my soak.

The sun was quite high up now that the only shade was from the bridge leading to the entrance. I scooted a little to the left to allow another old ladies to sit with her friend.

Then I saw a butterfly flutter past. It was flying prettily and did a dip into the water and proceeded to drown.

I let out a yelp and went to scoop it out of the water. The butterfly was safe but it clung to my finger, not willing to fly even when I blew at it.

The old ladies were curious and chattered to me. I nodded stupidly and showed them the butterfly. One of the kids joined us and later caused the butterfly to drown again.

I rescued the poor thing but it still would not fly away. In the end, I decided that I had enough of the pools and it was time to go for a nap. (I woke up at 4:30am today because of Machu Picchu hiking people.)

After I took photos of the butterfly, I nudged my pruney finger against the walls and it flew away. Bye bye butterfly!

At first I thought that I could come for another bath in the evening after Machu Picchu on Saturday. However, I was shivering really badly even under the sun so I thought it would be best if I did not do it in the evening when the temperature is even lower.

Do you like soaking in hot springs? Where’s the best place to do it?