When AirAsia was having a promotion for Japan in February last year, I chose to travel in mid-October, thinking I might catch the red leaves season.

Unfortunately, I was too early for the red leaves.

Fortunately, I was in time for the Jidai Matsuri, a Japanese festival I have been hoping to catch for a long long time.

Jidai Matsuti, or the Festival of the Ages, is a long parade where people dress up in period costume (sometimes representing historical characters) [inset Japanese history fan girl cheer here] stroll through a fixed path from the Old Imperial Palace to the Hei’an Shrine.

It’s one of the three major festivals in Kyoto and falls on October 22 yearly. The parade is to celebrate the move of Japan’s capital from Kyoto to Tokyo way way back. (You know what Wikipedia is for.)

I arranged our Kansai trip so that we will be able to watch the parade. Our hostel receptionist advised us to take the subway since some roads are blocked.

When we reached the subway station nearest to the starting point of the festival, there were a lot of people. Following not very clear road signs, we found ourselves next to the stoney path of the Old Imperial Palace.

There are paid seats but we didn’t get those so we sat on the stones along with the old uncles and aunties.

Mom waited at our “seats” while I went off to take pictures of the performers. 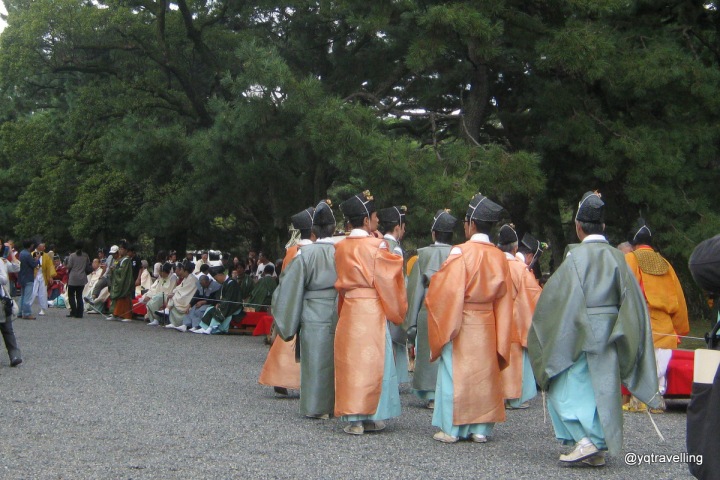 Some people also brought their dogs along. 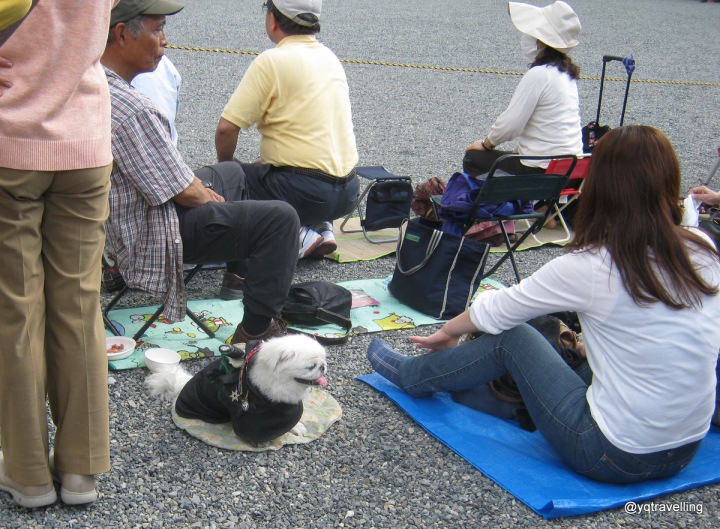 It took a while of waiting before the event started. The two obasan (aunties) in front passed us coffee candy while we waited. That was sweet of them.

The announcement of the start of the parade came and I waited excitedly.

Some ladies had a banner congratulation Kyoto’s 1300th birthday as a capital.

And a man carried a flag announcing JIDAI MATSURI. 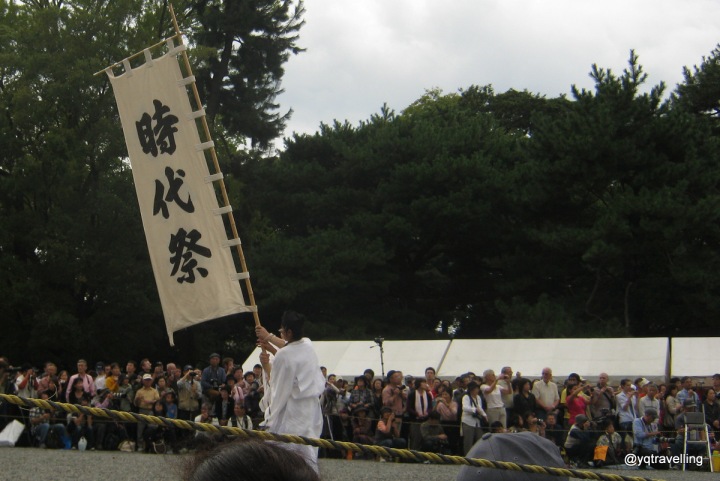 The parade started with the Meiji period when the country was westernized. Then the more fun costumes followed.

The women of Jidai Matsuri

I’ve always been fascinated by famous women in history because fewer women than men are recorded in history. I want to know how they overcome gender inequality to have a place in history books.

I want to know what sort of power they have over the men and their children. How can this power translate to our modern world?

It seems to me that Japanese history has many wonderfully romanticized female figures–some arepoets, writers, great beauties or wives of famous men.

The procession was oddly solemn. No one cheered, not even when the popular historical characters like Sakamoto Ryoma stroll by.

I wanted to stand up, clap and holler “BRAVO!” but didn’t because everyone else was quiet. The only time when the audience was lively was when a band comes along playing music.

Also, I regret not having internet to google every character that I do not recognize because of my very shallow knowledge of Japan history. It would be more exciting to know who that man in blue pants is.

Have you been to any celebrations with period costumes? How was it?

Week 27 of the Indie Travel Challenge is all about celebrating: There are many reasons to travel and many moments make traveling special. Have you ever traveled to another country during a new [to you] holiday? If so, what was special about it?

Other festivals and Japan transportation tips:

2 thoughts on “Travelling back in time at Jidai Matsuri”