Blog title taken from the title of a book that everyone should read: The Gift of Fear.

Despite putting on a brave front telling people about my solo travels, I have to admit here that I feel panicky before every single trip.

“What if something bad happens??!” Worst case scenarios run through my head: my body floating in the Seine, found dead in my hostel room, etc–all sorts of scenarios from bad detective novels.

Despite all my paranoia, nothing really bad happened to me on my trips. *touch wood*

That said, there was a scary incident in Paris. It is scary on hindsight but (fortunately) I wasn’t that afraid then–more annoyed than scared.

Here’s a recount of the event (with edited paragraphing) from my Paris travel blogpost (a copy and paste of my e-mail to my friend):

No need to panic but some random guy threatened to kill me.

Was walking out of train station to where I live. Heard someone calling out from behind. Ignored (bcoz you never know who it is, and quite a few mad men around). Shout got louder as I walked away. I exited, thinking I was safe. At traffic lights, a China man (only reasonable term I can use now) said something loudly to me. I turned to him. He looked red in the face and smelled a bit drunk. He rambled on loudly in his dialect. I never opened my mouth but gave him a look that said: What the f do you want?

He ended his rambling, asking: You are China person (def not “overseas Chinese” in this case), aren’t you? I shook my head and looked away to behind him, holding on to my not-give-a-shit look.

Then he said: Next time you do this, I’LL KILL YOU.

While i feel frightened now, I’m glad I held on to my BITCH PLZ look.

This was where the scary thing happened, in the evening with the sky slightly gray.
Credit: Google Map

Additional information about the incident. It was late in the evening in summer but there was still some light. The tunnels in the Metro were winding. There was a cafe opposite the exit–but no one sitting outside to witness the incident.

As I said I was not afraid when it happened. It was in my instinct that the guy did not have a gun or a knife with him. It was also instinct that told me: Put up a brave front.

Moral of the story: Trust your instinct but bring pepper spray, just in case.

How would you have handled such a scenario?

This post is part of BootsnAll’s 30 Days of Indie Travel Project: Day 6: Fear. 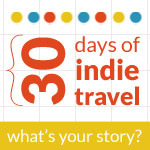 One thought on “Gift of Fear, travel edition”