Highlight of the day

Too many photos, you might skip my writing, so will write here. We saw a geisha in the afternoon. We were at Hanami street, walking in the alleys for twenty minutes then I turned into one of the lanes. MC was with me and we waited for PY and HY. Then they came and we strolle down, I always walk a bit faster and I reached the end of the street. I heard a wooden door open and saw a woman with kimono and geisha hair. I was speechless. I backed away and waved my arms wildly at the others. “I see a! I see a…!” and whispered, “GEISHA!” I was too afraid to take a photo of her. The others looked. A taxi speed to her door and she was off. HY said she felt that the geisha gave us a cold stare before going off. Amazing experience. Back to boring details of travelling First day of real travelling and everyone slept a bit later. Travelling is about relaxing, sleeping in never hurt any one. We’re staying in Tomato Guesthouse. It’s an ok place since we only need it for sleeping. The bathroom is shared. But the best thing is, they have FREE wireless. It’s also relatively near the train station. A short walk if you are not carrying any luggage. For our whole Kyoto trip, we buy breakfast from Lawson’s. HY loves the strawberry milk. I love the convenience stores in Japan. Unlike rumours, they don’t really have *everything*. They have “everything but not that thing you are so desperately looking for.” But no fear, there’s another convenience store just around the corner, they might have it. After buying breakfast, I went to buy the one day pass for both subway and bus, 1,200 yen. My advice, skip the subway and bus one day pass. It’s really not worth the money. Instead, get the 500 yen bus pass. Buses in Kyoto work well enough. And you don’t really ride so much of the subway anyway. Just pay as you ride for subway. The bus pass comes with a VERY VERY useful map with buses stops and bus numbers listed on it. I don’t know if they have those in English though. We chose our destination based on japan-guide.com. Our first stop was Sanjusangendo. It was near our place. Opposite is the Kyoto National Museum (which I did not go and will leave for future trips ) Sanjusangendo has lots of statues. That’s all I can say about it. I now realise I’m not that much of a fan of statues. Breakfast

No photo taking allowed in the hall, these are photos of postcards 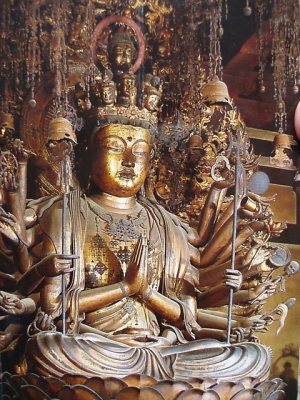 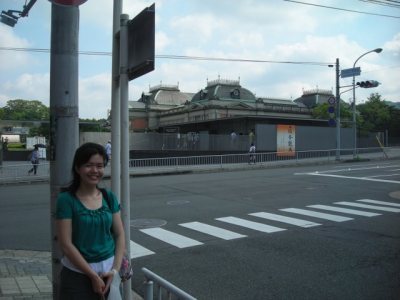 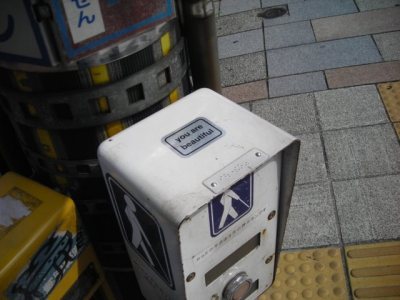 Next stop, Kiyomizudera. Be prepared to walk really really far! It’s on a hill and you have to climb uphill for a long time, pass shops selling ice that calls out to you to buy it at its 3 times more expensive price.

Lost PY and MC when HY and I stopped at a shop. After searching, we went into the temple. I tell you, we’ve been very lucky all this while during the trip. All four of us met up in the temple grounds soon after we went in.

Kiyomizudera’s grounds consists of other temples and I saw a famous shrine in it. Jishu Shrine has two rocks about 5 metres away from each other. It is said that if you can manage to walk from one rock to the other without opening your eyes, you wish will come true. 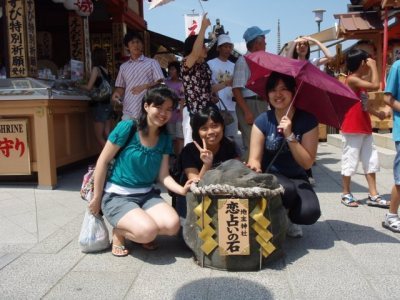 HY helped me with reaching the other stone. 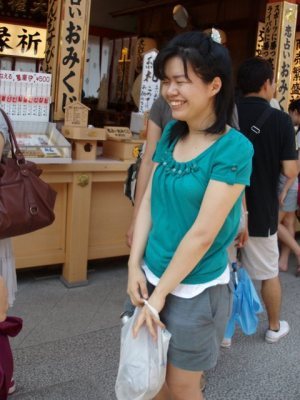 Hmm… I don’t remember what wish I made. But maybe it involves (jokingly) Toma and it came true. What a miracle! But what a waste of wishes, seeing an idol isn’t as good as getting a first class honours (which will not happen, but please at least give me a second class. Please!) 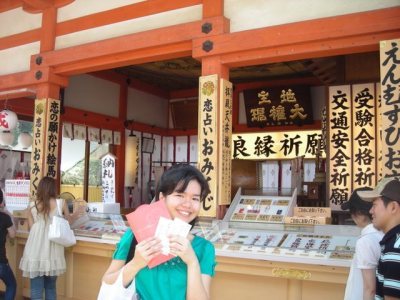 Then off to the main temple. Japan has lots of tourists but it’s not as crowded as it is in China. So it’s a lot more pleasant travelling in Japan.

After Kiyomizudera, we went down for souvenirs. In the souvenir shop, HY asked for directions to the Golden Pavillion. We walked downhill and to the bus stop. First bus came and we jumped on then at Gion, we alighted.

We saw Bus 12 on the other side of the road. I thought we would not be able to catch it if it goes straight, so I strolled leisurely. But then it stopped at the traffic lights, oh no! it’s going to turn. So we ran as fast as we could to the other bus stop. And luckily, we caught the bus. The ride to the Golden Pavillion was very very long. We passed Hanami street famous for geisha spotting and Nijo Castle on the way. We reached the place and have to buy a ticket. The ticket itself was impressive, like a “fu”. 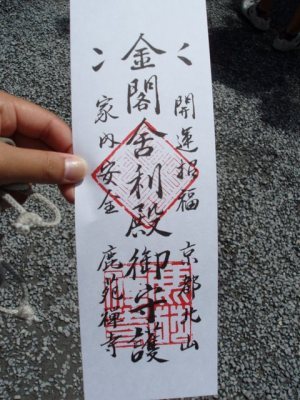 Perhaps it was too hot, the GOlden Pavillion didn’t look too impressive. But it was shiny, so that’s a plus. 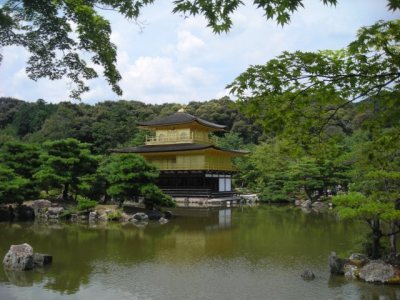 We reached there not too long afterwards and finally settles in a shop with old ladies as waitresses. We drank so much water that they didn’t have enough time to refill. 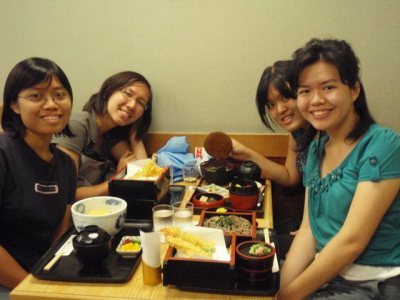 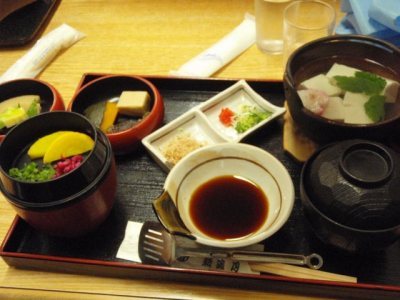 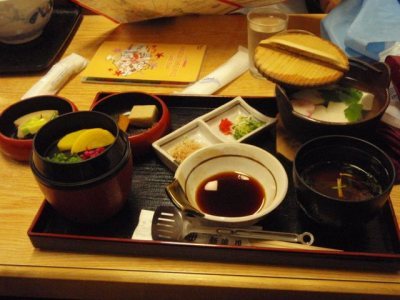 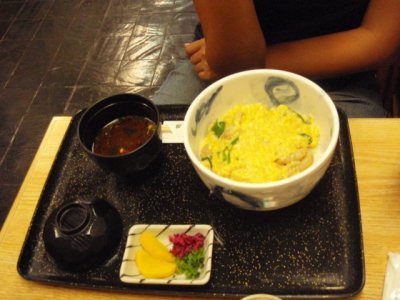 Our destination at the-place-near-Arashiyama was the bamboo walkway. We accidentally went to Tenryuji while looking for it. There was a shortcut in the grounds but we had to pay. Us being students on a budget, we walked the long way instead. 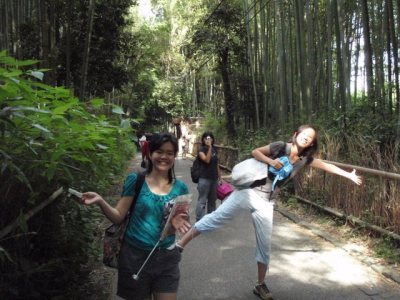 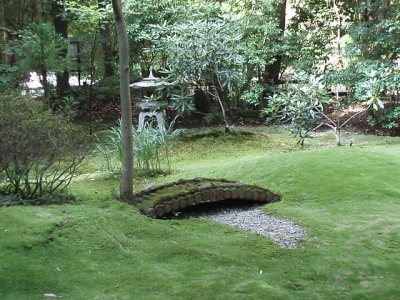 and (what luck!) we arrived at the shrine where Murasaki Shikibu was honored (some sort). It had a brown torii, unlike the usual red ones. And the place was good to pray for good grades. I asked for divine intervention. Please please please 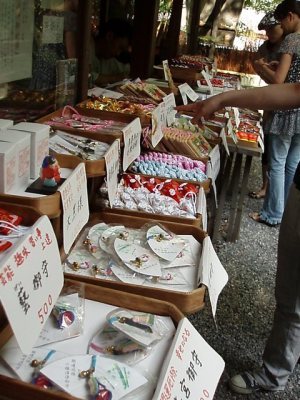 famous Kyoto shop selling beauty products. No money to buy, but posing with the sign is free 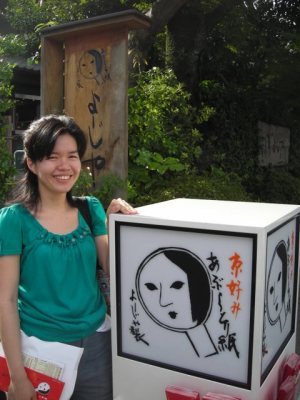 Back to Kyoto on a loooong bus ride. I remembered that a large French man sat next to me on the bus.

We stopped at DAISO and went to Fujiya for ice cream puffs that almost took my front teeth. 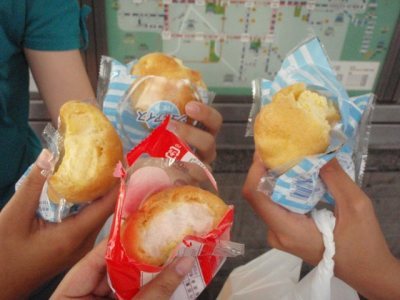 Saw this Maou ad at Lawson’s.

Our destination was Hanami street. From a movie, I learnt that this is where there are lots of tea houses. Tea housese = geisha and maiko (geisha apprentice). We were going to Kobe later for the night scenery so the only time we have for geisha spotting is now.

Lots of foreigners who looked like they were abandoned by their tour guides were there. There was even otaku-looking people with huge cameras. 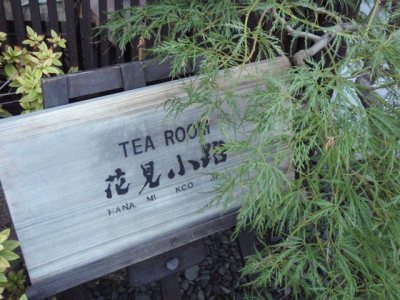 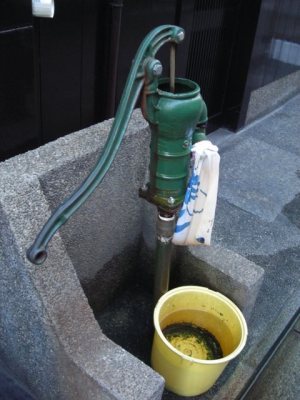 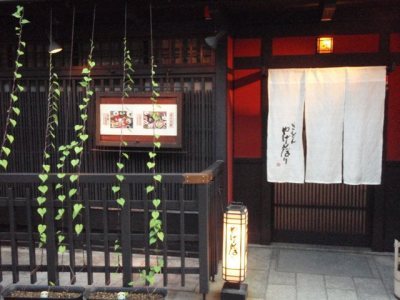 We took the small lanes and just when we were about to give up, we saw one going out. It’s the same geisha as the one I mentioned above. How lucky!

The duck river, where stalls are set up during summer. Romantic but too many people.

Then we took the train to Kobe. The girls helped with my fare coz I didn’t have a Kansai thru pass. THanks.

Arrived at Kobe in late evening and sky was dark. I like how Kobe looked at night, it has just the right amount of business (busy-ness) unlike Osaka with too much.

We went to CHinatown, at that time I was grouchy. Yes, I have a bad temper. Sorry about that 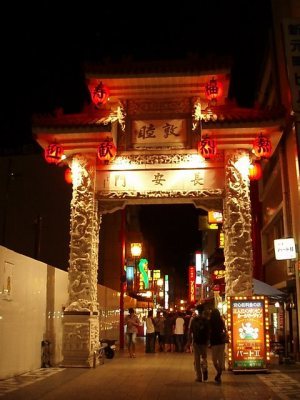 I felt weird that we’re eating Chinese food in Japan. But did anyway and the chicken was good. I love chicken! 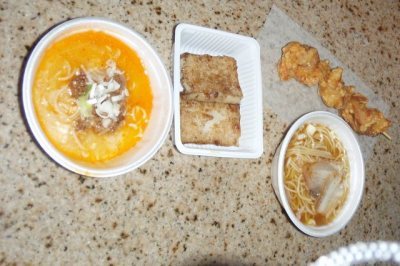 After dinner, we walked to Kobe tower. The girls went to ask a girl selling buns, they spoke to her in Japanese. In the end, I went up and asked if she spoke Chinese. She did (sorry, being mean here, but obviously it’s CHINATOWN!)

Kobe Tower’s nice at night. Even nicer than Kyoto. But when you look up, the clouds move so quickly, you feel that the ground is shaking.

I didn’t have the strength to walk around. SO I sat at the edge of the pier. 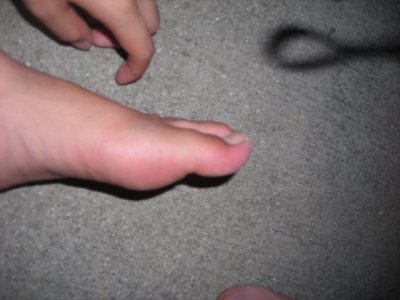 Then we took the train back. We were in time for all connecting trains. Phew!

Met a Taiwanese couple who was there for five days and did not understand a bit of Japanese. I admire their braveness and their obvious full wallets. Reached Kyoto really late. But was fun day