Warning: Use of undefined constant wp_4866990_ - assumed 'wp_4866990_' (this will throw an Error in a future version of PHP) in /home/yqtravel/public_html/wp-config.php on line 65
 I went to a cat cafe for a dating event #meetmeowmingle - YQtravelling

I went to a cat cafe for a dating event #meetmeowmingle

Hello! You guys might remember my post about why going to a cat cafe is like online dating? At the end (before the cat photos), I wrote, “You do it again because you’re a masochist.”

Well, I did again. I went to a cat cafe AND this time it was for a dating event.

Let me just back track a bit. I made a resolution this year to go on one date at least once a month. Knowing myself, I deliberately left a loophole: Going to a dating event count as a “date”, even though I know that likely nothing would come out of it.

When Neko no Niwa (Singapore’s first cat cafe, hence their awesome URL) posted the announcement for dating event–adorably called #meetmeowmingle–I was psyched. It’s two birds in one stone: I could see cats and cross off my April to-do. Hurray!

To apply for #meetmeowmingle, I first wrote an e-mail expressing my interest. The owner wrote back and asked three questions: my age, my gender and two reasons why I want to join the event.

Afterwards, there was a Paypal payment. Once that was confirmed, I filled in a form which had questions about what my hobbies are, a few interesting things about myself and an embarrassing situation I experienced.

Then there was a part about which cafe cat is my favorite. I like Skittles but I didn’t recognie her throughout the night. :<

The e-mail from Neko no Niwa noted that we should reach at least 10 minutes before 8pm. For me, that means reaching 20 minutes before the event because I’m that person that goes to appointments too early.

When I reached the cat cafe, I was told that the ladies would wait in the cat room while the guys waited outside. I thought that was kind of sad as everyone deserves a chance to be with the kittehs. But it worked in my favor as that  meant more time for me with the cats.

Despite the extra 10 minutes, I didn’t have a lot of luck with the cats. Even the ginger cat Jia Jia which was physically put into my lap escaped. I jealously looked on as a lady stroked Brown Monkey in her lap. :(

Anyway, the cat lounge was separated into eight sections. Each section either had sofas, chairs or high stools with a table. On each table, there was a cup labeled “Ice Breakers” and had popsicle sticks in it. Right before 8pm, the ladies were told to sit at a different section.

The first segment of the date night was speed dating. I stuck my adorable name tag on my arm. The name tag has my name, my favorite cafe cat and an “Ask me about” section.

The conversations usually start off with “How many cat cafes have you visited?” From this, I learned new things about cat cafes in Singapore, such as The Cat Museum.

After that initial question, I nerdjack the guys to talk about improv. Throughout the hour, every man who sat at my section listened to a 2-minute monologue about improv. Sorry.

When each speed-dating session ends, some of the guys would collect phone numbers or e-mail addresses.

I wrote down their names and took notes. Note taking is very important because by tomorrow, I would have forgotten which person matches with which name. 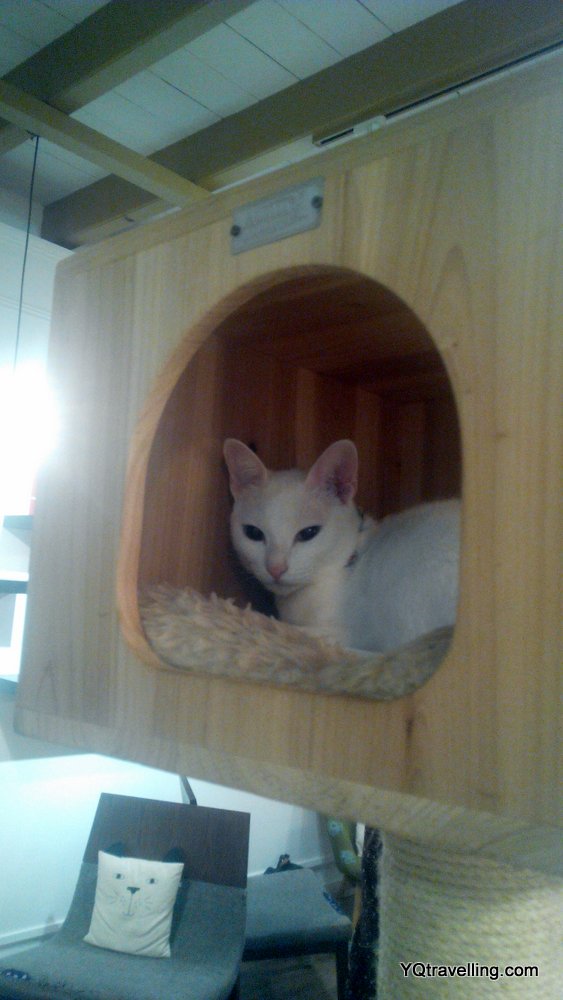 After the very short round of speed dating, it was human bingo time.

Remember the interesting facts about ourselves that we sent during the application? The cat cafe printed out sheets of paper with 4×4 boxes that included the facts. Separate sheets were given to different genders.

The human bingo is  actually a competition. A person from each gender to get the most BINGO lines would win a $20 voucher to the café. When I heard about the prize, I was alert and my hyper-competitive spirit poked out of the hibernation cave. I set off to get all the boxes filled.

In case you want to know what interesting facts about me were included:

Just 5 minutes before the round was ending, I had two boxes that were empty. I knew that there was just one guy whom I hadn’t confirmed the details with but a lady was busy talking to him.

The organizer told me to just interrupt the talking couple and get my answer. So I brashly inserted myself into the conversation and ticked my two boxes. Even better news, the guy was familiar with Thailand and I asked for tips on what to do in Bangkok. Several days later, he sent a ~1MB Word file with very awesome suggestions. Thanks dude! 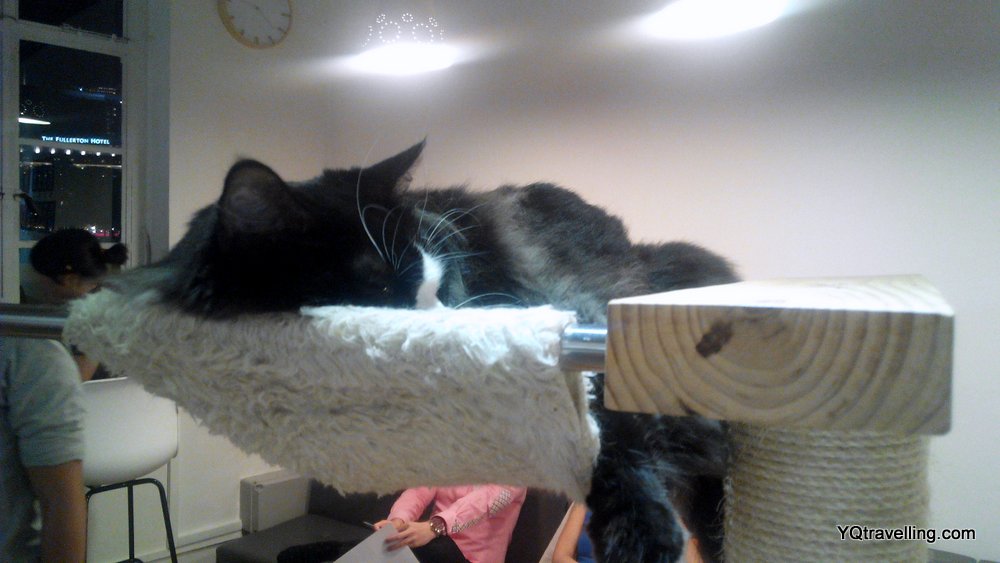 As for the results of the competition, only one guy had the most boxes filled. But for the ladies, there was a tie.

The organizers picked the winner using trial by cat. She put the two sheets on the floor and asked a cat to sit on one of them. I was too far to see the actual selection process. But guess whose paper the cat sat on? Me!

While everyone was about to go back, I overheard a lady telling a guy, “Are you going to whatsapp me the photos?” I thought that was brilliant: Not only do you get the  guy’s number, you will have a conversation starter. I’m impressed.

Well, I had a good night at #meetmeowmingle. The people were quite alright. But I still have a lot to work on to get the cats to like me.

PS I went to another cat café in the same week. The Company of Cats had a Spoken Word rendition which included 1.5 hour with cats. Here’s me with one of the gingers.